Just one day until the Irish Derby festival kicks off at The Curragh and I dont really blame trainers for not running their horses this week, another really difficult card tonight. The handicaps look basically impossible so they all got crossed off the list along with the 5-50 because most of the two years olds havent had a run. One horse stands out an absolute mile on the card, Rain Delayed in the 6-50.

It doesnt take much to win a 5F race over here, not much at all really, our last good sprinter was Dandy Man and I cant remember how long ago that was. It normally pays to back all the English sprinters when they come over, I'd say there'll be a few at the weekend. But anyway tonights race, Rain Delayed has been fairly impressive in all his starts so far this year. He was unbelievably eye-catching at Navan the first day, won at Down Royal quite well the second day and wasnt beaten too far at Sandown in a race probably too hot for him. Small worry might be the ground, it should be lighting quick with the weather were having at the moment but the Racing Post said the last day in their race review - "Irish challenger Rain Delayed displayed a fluent, fast-ground action," I'll take their word on that and wont be blaming the ground if hes beaten.

It looks a match on paper and the main danger is Croisultan, who to be honest isnt the greatest horse and would like softer ground. I'd honestly be disappointed if he was too good for Rain Delayed, he won what was basically a three horse race walkover at Navan on heavy ground, then they ran him over 7F in Epsom because they thought he wanted further, he finished last but still why bring him back to 5F on firm ground if you think he stays further, I wont knock him too much or he'll win! He has a good piece of form finishing second at Navan again in a listed race, again on soft ground.

Rain Delayed really stood out a mile for me when I first looked at the card without the prices, hes a tad short at 8/13 but he should win really, hes not quite a sell your kids and have the money on kind of certainty but I would be properly disappointed if he couldnt win tonight, I think hes close to a good thing but we'll see! I've gone for 4pts win, would normally stay at 2pts most of the time but I'm pretty confident and its worth it to go up I reckon. **(Edit, removed the Michael Jackson joke at 23.12, RIP, cant believe it)**

The rest of the card is too hard for me to have an opinion, hopefully Johnny makes it back from England to ride him, he had all sorts of problems with his flight last night and was stuck in the airport until late, his appeal was at 9-15 this morning and still havent heard if hes gotten away with it or not, its probably still going on - "Sure listen, Aiden said when you cant win to knock out at least two horses to help the others get closer - listen, remember how good I was in the Irish Derby last year - listen, great success!" Lydia Hislop will be seething! 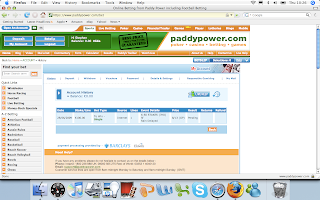