Didnt post yesterday as I was going out last night and didnt have the time, but had a shocker losing around €120, major trouble on the darts while I was waiting for the girlfriend to get ready, traded four matches and lost on all of them! While the cricket went well it only made up for the darts loss, I lost €50 on the Murray match and the daily horse lost too so the losses were adding up.

Today on the other hand was amazing! And ended up with a profit of just under €900, its such an incredibly thin line between a profitable day and a losing day on Betfair, yesterday I went playing golf, sat down on the computer at around half five for a few hours and could not do anything right, was down near €250 before the good result on the cricket. While today, was away from a computer until half six, sit down and make €900, I have to say there wasnt much difference in my mood or approach either day, and I end up with two massively different P&Ls. Obviously with the daily horse winning today it was a big help, and I really am delighted to get over the €14,000 mark, I've been stuck around €13,000 for ages now, really enjoying the daily horse and I think its helping my gambling too.

When I was 15 and in the local bookies with my grandad he used to always back no goalscorer in GAA football matches between the northern teams mostly, normally tight matches between two evenly matched sides. I was basically bought up on this bet along with him giving me €1.50 everyday for a lucky 15, he rang me this afternoon to tell me about the Monaghan v Armagh game, Ladbrokes were going 9/2 no goalscorer and its normally around 7/2 or sometimes less, in tight games teams dont even think about goals and its always a useful bet, but never ever in Hurling games or Dublin/Cork/Galway/Kerry football games. Its came in again today, I remember when I was little we'd watch the matches together and he wouldnt watch the last ten minutes through nerves, he'd go make a cup of tea and I'd have to shout into the kitchen what was happening, those were the days. He hasnt been well this year and I've made much more of an effort to see him nearly every second day, thankfully hes OK now though, but he thought me everything I know about gambling.

The horses loss on Betfair today was laying my daily horse at 2.04 in running. I was sitting here after the race thinking why did I do that, but there was a circuit to go and I thought it was a tad low, also after yesterdays poor day and my GAA liability at the time, were everything to go pear shaped I was looking at a -€300 day on the back of -€120 yesterday. I shouldnt be afraid to lose but I strongly feel you have to look after yourself, things can change very quickly and I'm very careful not too let losses get out of hand, it does sometimes affect your profit like today, but overall I'd rather have the insurance. Rather things bad than terrible if it does go wrong! Anyway, P&L line from Betfair last two days.. 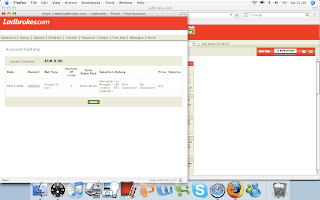 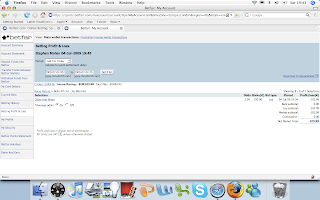