Todays tip - dont play two rounds of golf back to back without sun cream, I'm in so much pain with sunburn its not even funny! Its an alright card in Bellewstown tonight, lots of competitive races, I had a shortlist of three - Takasima in the 5-30, Essex in the 8-00 and the one I've gone for, Older And Wiser in the 7-30.

Takasima was probably third on my list, the more I looked at her form the more I wasnt happy backing her. Shes seems as if shes gone backwards from her first two runs, and she doesnt look the most consistent type either, that said if she ran like she did on her first two runs she'd have no trouble winning this race. Shes by far the most likely winner but for me theres just one too many reasons not to back her, she'd be the last horse I'd want to lay though.

Have to say I'm not a massive fan of betting in handicaps and I barely ever do it, but Essex in the 7-30 appealed to me a lot each way at 6/1, you have to go back ten runs to see the last time he was out of the first four. Theres 16 runners tonight, cue a non runner I know! But he seems to be in good form and running well all the time, he just gets lumbered with a massive weight in every race these days, its hard to win of the type of weight hes running off and that was my reason for not backing him tonight. I'd be surprised if he wasnt in the first four, every race hes run in 2009 has been a good one.

I've been waiting a while for Older And Wiser to step up to 3M and he does just that in the 7-30, with the booking of Ruby a massive plus too, although I hope he doesnt overdo the hold up tactics because this horse just stays all day. He'll have no problem with the ground, while his main danger Energiser seemed to enjoy heavy ground at Punchestown and ran probably his best race there, he finished second on good ground in Wexford as well although Wexford form wouldnt be the strongest. The step up to 3M will see a much better Older And Wiser, and as long as it doesnt turn into a falsely ran race or any type of a sprint Older And Wiser should out stay them. 9/2 was a big enough price considering hes good form, will definitely improve for the trip and has the champion jockey on board. The minute I backed it VC cut it to 100/30, it was only 50 quid lads dont panic! But I quite strongly fancy this horse today and I've backed it at 4/1 with Paddy Power too again for 2pts, I think hes a fantastic chance.

Over in Sandown, the big race is at 3-15 and I find it dificult to have a bet to be honest. For all my trying I find it impossible to get a read on Rip Van Winkle. He looks amazing at home, amazing at the track, eye-catching all the time, basically amazing in everything he does but he still doesnt win, there has to be a reason for that. It may turn out that 1M2F is perfect for him but I want to see him win before backing him again. While Sea The Stars at 8/13 doesnt appeal to me either even though he looks such a good horse, so many Derby winners have got beaten in this race and maybe English people dont know this but MJ does make more than his fair share of mistakes these days in Ireland, it wouldnt surprise anyone here if he got into trouble today, that said this horse will probably get him out of it because he looks a superstar. I've a friend who "wouldnt back MJ on a horse if he was given the result before the race." I really hope Rip wins but I wont be backing him, I'd love him to cruise it on the bridle, he just looks like a horse thats utterly amazing and could do anything, he hasnt done it on the track though so we'll wait and see. 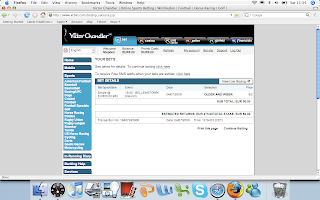 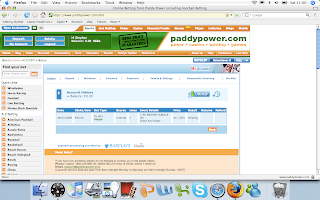