Frustrating day! Started off by the daily horse getting a shocking ride, few people were shouting fix but I never buy into that sort of stuff, the jockey did nothing to help himself though it has to be said. It was just poor judgement to give the leader so much of a head set, most annoying when your horse is stepping back in trip to be asked to quicken to find 10L, but thats the game and I cant do anything about it.

The tennis was rather boring wasnt it, it only went to 16-14 in the last set I was expecting better. Really it was an absolutely amazing match and feel gutted for Roddick. While I traded it pretty poorly losing €220, my gambling side came out in the final set because I went a touch green on Roddick and left the big red on Federer, no complaints though great match, I would have loved Roddick to win, top bloke.

The GAA worked out well for me in the end but was frustrating enough the way Kilkenny played, I had €500 on them to cover the handicap and wasnt at all happy at how they were playing, amazingly they were shorter at half time so traded out while they were six points ahead, then getting on Dublin half way through the second half to make €80 out of the game. Kilkenny were poor to be honest, a lot of shouting at the tv was done in the two hours.

What today has pretty much confirmed to me it that, for me at least, its far more profitable to bet in running than it is to pick something before the off. Three things happened today, Cork started 1.1 and went out to 2.5, Federer and that match, and Kilkenny not playing well, any of those things I couldnt see coming beforehand and all were very short prices. For the next week anyway I'm only to bet in running only, except the daily horse of course, and see how it goes. I'm leaning more and more to only betting in running on sport in the future, it does take a lot of the guessing away, and if I trade the game poorly then I only have myself to blame then.

I do have €50 all green on the golf at the moment, and €100 if Tiger wins, so the P&L for today isnt as bad as it looks now! I'll put the golf in with tomorrows. Its been an alright week on Betfair, while the big wins have come with the bookies, overall its been a pretty good week. It kind of confirms I should stick to what I'm best at, cricket, GAA and horses. Discipline! Would have been a better week on the horses if it wasnt for laying off a few bets I had with the bookies. 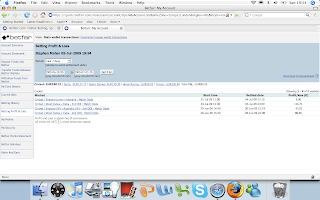