Fantastic day today even though I lost, great result pulling back the cricket, thats all in the last post. Apart from that nothing much happened over the last two days really, its been a fairly quiet week on Betfair to be honest. The Pro40 is back tomorrow so things should liven up a bit. Lost on the session runs this morning on the last ball, was gutted, had €200 green below the line and €450 over it, €36 for the 10 runs inbetween and it came in inbetween! Should of known it would happen really, I have every chance to go green too.

Won a few quid on the GAA, but as a Kildare fan I'm still seething with the free the ref gave Dublin with two minutes to go in front of the posts. Still cant see why he gave it. But credit to Dublin they upped their level in the second half, I still hate them though, Kildare played well but whatever happened at half time they didnt come out the same team that went in.

Massive reaction to what Frank Spencer did in the Oaks, Fran Berry is good craic and he was only having a laugh with him. But at the same time I can understand why some people dont like it, personally at the time I thought it was a bit childish from a champion jockey but I dont see anything wrong with it really, if I was in his position I wouldnt have done it but anyway everyones different. Just win the race and to hell with showing off, although I remember I really loved it when Paul Carberry did it at Leopardstown a couple of years ago, I was a teenager then and now I'm in my twentys, weird how your view on things change. I'm getting old. It pissed rain all day as well.

As I said its been a really quiet week on Betfair and I'm in profit a touch this week, the tennis is still in the weeks screen shot but that was Wimbledown last week so this week has been better than it looks, last Sunday did a bit of damage I think with a big horse loss too. Hopefully next week there'll be more things on to bet on, said like an addict. I've also joined 'The Paul Collingwood Appreciation Society' on facebook. He is my new hero, he is the daddy! Who said test cricket is boring? Er, me, two days ago actually. Ah life. 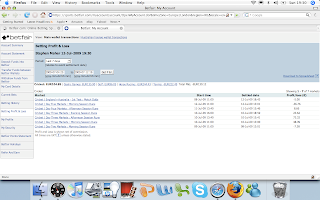