Pretty busy day tomorrow and going out for dinner tonight so I'll post now, have my bet done already anyway. Have to say I'm not that impressed with the card for an Oaks day, apart from the first race and the big one nothing really interests me too much. Theyve been far from clever with their race times too, Dublin v Kildare kicks off at 2-00 and all the good races are on while the match is on too, I thought the the match was at 4-00 and I could do the both, they'll find it very difficult to attract any sort of crowd even if it is only €10 in.

Dont agree with the horses Johnnys picked tomorrow in the 2-05 and 3-05, after Beethoven lost in Naas I said I wouldnt back him again, that race was far easier than this one, and to pick an unraced two year old on this ground seems a bit odd given AP's always need the run. I know Black Quartz disappointed during the week but he'd still be my idea of the winner over a furlong extra on testing ground his stamina should be a massive help, I'll watch tomorrow and see what happens. I think hes picked Beethoven over Air Chief Marshal because of the ground but we'll see how they get on. Two races I wouldnt be too keen on having a big bet on.

The big one is at 3-40 and it'll be on just about the same time as the match finishes, The Curragh have really messed that one up. Anyway, with the ground the way it is at the moment and more rain on the way I'm quite happy to take on the front two in the betting, English pair Sariska and Midday. While the Oxx filly Beauty O Gwaun will absolutely love it, but her run didnt scream Oaks winner the last day at Naas, I'm happy to look beyond her as well, and then after the front three in the betting there isnt much else to worry about on form. I just have a sneaky feeling Roman Empress will run a massive race tomorrow. Johnny looked after her here the last day when she raced against the older fillies and it was more of a prep run for this, at the start of the season the Epsom Oaks was the aim but she need a bit more time to strengthen up and that went out the window, I think AP has been aiming her at this race all season since. While shes won on good to firm ground in Limerick (more easily than the distance suggests), I think she'll love the soft (or heavy by race time) ground tomorrow and at 33/1 with Paddy Power shes worth a poke each way for me.

Obviously I'm hoping she finds a bit of improvement to trouble the big two but theres worse 33/1 shots knocking about, she'll either run a cracker and finish in the first three or she'll finish last, its one of those. Chirkova will most likely make the running (Roses For The Lady might be there to do that for the Oxx camp too) and I think Roman Empress will really enjoy the stamina test on soft ground, then you can basically write off Belle Chose, Rory Anna and Destined For Fame. Grace OMalley has a lot to find on form and Oh Goodness Me has questions to answer about the going and trip, so I'll take them on and say its a four horse race paying first three places and Roman Empress is 33/1. I fully understand though that people could say the exact same about Roman Empress as I've said about Grace OMalley and Oh Goodness Me. However, shes sightly unexposed though, forget the last run for a couple of reasons, it was against older horses and it turned into a sprint and she couldnt live with them, Johnny accepted it fairly quickly riding just hands and heels but I think he learned she needs a fast pace that day and she'll get that tomorrow.

I'm also happy to forget the run at Leopardstown because she really just didnt turn up and it was at a time when AP's horses werent running well at the start of the season, it was her first run in a while and she needed it badly, he gave her a nice break afterwards so he wasnt happy with her after that race either. She ran a really good race in Navan on soft to heavy ground on her first run of her career and won at Limerick when she came back from her break. Those are two good runs and with good enough excuses for the bad ones for me she could be anything, we'll find out tomorrow anyway. All things considered shes the forgotten horse of the race, I'm more than happy with 33/1 each way, just hoping things go to plan and she runs a good race now. 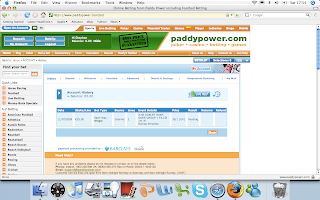