Running a bit late today, and its a fantastic days racing, delighted I havent missed the boat with prices on some horses and it was a horrible feeling checking sky sports to see if the Aussies lost a wicket or not, never sleeping in when I've open positions again.

Over the moon with the price I got on my pick today, At First Sight in the 6-05, Ladbrokes were going 6/4 when it was 2.3 to lay on Betfair. Even this early in his career, you'd have to say if he didnt win this it would be more than disappointing, given the fact he ran a very eye-catching race in what in my mind was the best maiden run in Ireland this year. He wasnt the stable first string but made a lot of late headway and it must be a massive plus that he steps up an extra furlong today. The reason why I say it'd be so disappointing if he got beaten is the opposition, he has more scope for improvement than Mutaraakim who finished 6th in a weaker maiden at The Curragh, and the main danger is Cool Marble, but hes basically raced against the same horses in his two runs at Leopardstown and looked one paced in his last one. He was totally friendless on his first run too which doesnt really happen if the Weld camp think much of it, hes not a bad horse but at the same time hes not a great horse and would most likely be running in handicaps in the future. AP's always come on for a run and he should be good enough for these really, was very close to having 4pts because of the Ladbrokes price but stopped myself, bit of discipline does no harm.

Over in the Newmarket, my favourite Ballydoyle two year old runs, I absolutely love Emperor Claudius. Still seething he didnt win in Royal Ascot because he was given far too much to do, but Johnnys back on today and he should have him nearer to the front, he was ridden that way when he won in Fairyhouse. His form in Ireland is rock solid and ties into more than a few winners over here, the 7F trip will be perfect at this stage of his career but he reminds so much of Gaints Causeway in that he'd win a battle if it comes down to two in the final furlong, he'll always give you his best. Have to say I dont know much about the opposition but I'd be gutted if he didnt win today, or at least finish a very good 2nd. Its miles and miles off but hes my idea of the 2010 Derby winner already! He isnt as flashy as a Rip Van Winkle or a Steinbeck, hes a bit like Fame And Glory, he just goes about his business without fuss and gets the job done. I'll have a tenner on J J The Jet Plane as well today, no more than a small feeling he'll run well.

While back in Ireland theres a few horses I want to see today in Cork, Pirate Ship in the 6-15, still confused how Johnny got him beat in a four horse race that last time. Essex finally gets into a race fairly treated in the 7-20, although I couldnt back him until he starts winning again. Buck Barrow is a massive talking horse this morning in the bumper, but Flat Out should give him a good test. And back in Gorwan, if Drumbeat doesnt win the 7-05 he might just be heading to be the next Red Rock Canyon, even though hes already won a race. Cracking days racing everywhere today. 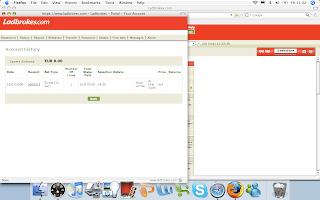