Cracking card tonight in leopardstown, best evenings racing for a while, kind of annoying they dont have student fees for the evening meetings and youve to pay full wack to get in. Lots of talk of getting more people racing and things all this dont help at all, there wasnt many people my age last week at the track.

Anyway, three horses I really strongly fancy tonight, Cape Blanco in the 6-30, Roan Inish in the 7-00 and Casual Conquest in the 8-00. I think all three of them will win, if not go close, dont really have a favourite between the three of them either, will be looking to do trebles and trixies tonight out there. And obviously back them on their own too.

Cape Blanco is more of a bet that I've been told to back him, rather than on form. He won his first race in Fairyhouse well though and its always nice when AP's win first time out because they always come on for the run. They really fancy this tonight so I've no issue going in fairly big, I like Miracle Match as a horse but you'd have to think Cape Blanco will have too much for him, while Perfect Symmetry is a funny type of horse, hes alright but no world beater and even though hes won a listed race, that was an awful race. Again you'd think Cape Blanco will be too good for him, he has bags of improvement to come. Missed the boat a bit with the price this morning but 8/11 is still fair price, even already there'll be serious fingers burnt if he doesnt win.

Roan Inish is a personal fancy, second to Cabaret at The Curragh on her first run, everyone seen what Cabaret went on to do last week and if Roan Inish can run like she did that day, she should have no trouble winning this race. She'll have no problem with the ground either, I'd say it'll be soft even without any more rain. Queen Of Troy wont like the ground and is the least fancied of all AP's runner tonight, even though that wont stop her winning! It'd be disappointing if Roan Inish couldnt win here.

Dont have to say much about Casual Conquest, hes a fantastic horse and is miles clear of the rest in this race. He'll have no issue with the ground tonight either after winning so easily at The Curragh on far worse ground. The second has boosted the form no end since then too. And while Beach Bunny is a good horse, you'd have to think Casual Conquest is miles better and on best form he'd win easily.

Just to continue with my money for nothing idea, tried backing two horses today for €300 and €200 with the idea to lay off on Betfair, its kind of worked but not enough really. I'll get a fiver out of each though and thats alright, €10 for nothing is great. But what I did learn today is that there has to be a bigger gap between the odds to make it pay, still learning how to do it. I still reckon it will work for me, I'll keep a record of how much I make off doing it for the next few weeks to see. 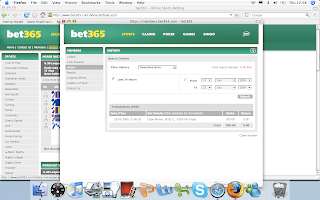 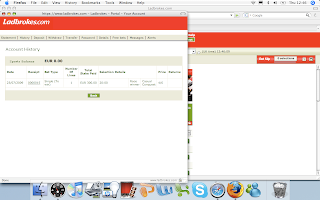