Just to say it has indeed rained overnight and the ground is now heavy, they got 10mm. Thats a plus for the main danger Walk On Bye, but speaking to a few people this morning the general feeling is that Alfred Nobel will go on it. After watching his run back at The Curragh when he finished 3rd I tend to agree he'll go on it, I think its just a case of hes improving every run and throughout the year, and that run wasnt a bad one, its just hes a better horse now than he was then.

The off is 3-40 and it looks a two horse race. In Some Respect, Beethoven and King Ledley have all been beaten by one of the front two in the betting at some stage, with King Ledley being beaten by them both. I know the Stack camp really rate their filly so it would be no surprise should money come for her and push Alfred Nobel out a bit, but at 6/4 right now I think thats a brilliant bet for me. Theres plenty of confidence behind them both, so its basically which side of the fence you sit today.

But this is my view anyway, I'd question Walk On Byes form, she beat Mister Tee on her first run by a short head in what was a weak maiden, alright she got boxed in and should have won further but it was still a weak maiden. I backed Mister Tee because it looked his race to lose, and hes not a world beater. Alfred Nobel finished comfortably in front of him when he finished 3rd here and he has improved with two wins since. Walk On Byes second run was again a weak looking race, the two Ballydoyle horses that day werent fancied in the slightest and their far from the top of the tree in Tipperary. Walk On Bye beat King Ledley into second, Alfred Nobel has also beaten King Ledley here on Derby day, pretty easily. So I dont think Walk On Byes form is good enough to beat Alfred Nobel on paper.

At the start of the season the one thing Johnny kept saying was that he'll get better every run and as the seasons gone on, so far hes been spot on with that judgement, hopefully Alfred Nobel can improve again today. Hes not the type of horse that will win by far, he'll make everything look hard when it isnt, I was stood at the rails the last day as he went past and it couldnt have been any easier to be honest.

As I said, its going to be whichever side of the fence you sit but personally I thought yesterday that Alfred Nobel was a certainty, the rain last night has knocked that view down a peg or two but I still think hes good enough to beat Walk On Bye. If she has improved and goes flying past in the last half furlong I'll have no complaints but I'm happy having €250 on Alfred at 6/4.

Just to say, the points thing there on the side, I'm going to stick to 2pts win on every selection from now on just for handiness sake. But I seriously like Alfred Nobel today, he would be a max bet on the old points system. The fact I won €200 yesterday for the challenge takes a bit of pressure off the bet, but I'll be having a bigger bet on course. We'll know whos the best by 4-00! 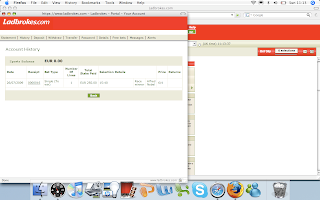