Totally confused whats going to happen in the test at the moment. Was wrong about the draw back, but funnily enough it came back it after I redded out, no idea why! But was right about wanting to back Australia in double figures and got a good trade out of that, so my book is currently like this:

I'm happy with that for the time being. I seriously, seriously want to back the Aussies to chase this down, but theres just something telling me not too, dont know what it is. The highest ever run chase? Still an awfully long way to go, and at 5.2 one wicket and it shoots out a fair bit, I might look to back them after a wicket, but then Ponting is a nervous starter. I reckon they'll need a 100 from Ponting and Clarke to get the runs. The draw is totally kaput now unless it rains, if the Aussies bat the time, they win.

The pitch is after getting a hell of a lot easier to bat on judging by today, nearly 400 runs for 5 wickets I think. That makes me want to back Australia even more but will wait and see what happens in the morning, its miles closer than the odds suggest, but at the same time too close to know what to do, I think Australia do it, but a world record chase to win the Ashes, I dont know. Tomorrows morning session will tell a lot about where the games going.

Aside from the cricket, backed Cape Blanco in Fairyhouse, he didnt win as well as I hoped for but I suppose a wins a win on that ground. Arsenal won too to get the football bank going again. 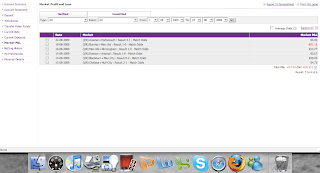