Ever have that feeling that youre an absolute mug? Well, I've got that feeling right now! Its horrible, sitting here thinking what kind of tosser am I. Betting on the weather, what a bad idea, on the cricket completed match market tonight, covers coming off so lay "No" then as there just about to come off it starts to rain again, ten minutes later the match is called off. Felt like I was doing the right thing at the time but god it feels awful now, you only get that feeling after youve lost money though like you never feel like this during the bet. Anyway, seriously not a happy man so off to the gym.

Horses went well again today and it was a good day ruined by one silly bet on the weather, what a mug! By the way, racing on RUK is a million times more fair with their picture speeds than ATR, if I had of played better today could have easily won €100 plus, just was a bit slow and got buttons wrong a couple of times, putting €1 in instead of €11, doesnt accept €1 then, that happened maybe 3 or 4 times and missed out on €40, and missed a few races due to internet going down because the weather was pants again here today. 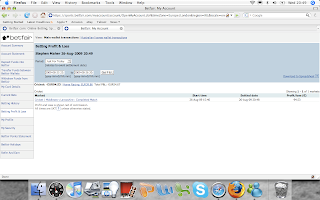