Blessed. Without question probably should have lost my whole betfair balance (€300ish at the moment) twice today. How in the blue hell Ireland didnt chase down 116 in 20 overs against England today I'll never know, we are pants, I couldnt believe Ireland were odds against to chase it down to begin with though. Lumped on them only to bottle it when a wicket fell early enough in the chase, but they were odds on at that point so still had a big green on Ireland, nothing on England. England won by two runs but this happened with on the second last ball "19.5 Shah to T Johnston, 2 runs. Towards the long-on boundary and Morgan, on the field, throws it back into play, stops the six." An Irish bloke stopping us beating England at cricket, fantastic! That said I'd play for England too for the money but anyway.

Second game was a fair bit of a joke to be honest, the wind was too strong so they had to take down the lights, which was fair enough because I dont like people getting killed by falling lights you know, but they knew this before the game yet play 27 overs one side and then let it finish on D/L after 12ish overs (the guess at the toss). Why they didnt go with 18 overs a side I'll never know, stupid really. I got myself into a horrible position backing Surrey at around 1.6 after 2 overs chasing the total, they only needed to be at 41 after 10 overs to win, but they started losing wickets and got behind the rate very quickly. So I was looking at -€154 Surrey with Kent trading at 1.24, laid that for €100 to bring my book back to as if I'd backed Surrey at evens in the hope of a flip flop.

It doesnt work all the time and makes it worse when it doesnt come off but on certain sports when flip flops happen a fair bit its well worth the extra few euro red at the time, it only would have made it €25ish worse anyway and it was giving me the chance to get out. Sure enough the flip flop came, for what reason I'm not too sure because Surrey were never ahead of the rate (closest was 3 or 4 away), and I was able to get rid of my red at evens. As I said you know, sometimes it'll make things worse but laying low price doesnt do much harm, and it gives you more options for getting out, like today there was no chance of Surrey going back to my 1.6 to get out.

Got the football bank going again backing City, they look fairly good to me, will back them the weekend too. Thinking of backing Chelsea in the early kick off before, and thought Arsenal looked a massive price against United, I'm a United fan so its nearly impossible to back against them cause it'd be just stupid hoping for two things and ruin the game. But Arsenal are playing well and thought the odds should be a bit closer. Didnt have the time to play the horses today, but dont think I missed much with two all weather meetings on out of the three meetings, its a shame theres so much all weather cause its not the greatest. We had a good shower in Leopardstown this evening I'm told so its looking good for my 7/4 on Fame And Glory, at the moment I'm hoping Sea The Stars doesnt turn up, but even if he does I'd still be fairly confident of beating him (as confident as you could be against a horse like him anyway), 7/4 on Fame And Glory was massive at the time with the weather were having regardless of what happens. 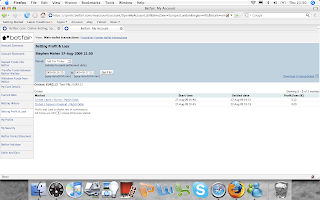