Surprisingly not that gutted its gone, because it was Liverpool! Have to say I did have a little laugh at them this evening, I shouldnt really back them but seriously thought they would have won tonight. At least if the bank goes, its gone with Liverpool and not United, last time I was seething.

Have to say absolutely everything pointed to a Liverpool win tonight before the game and it goes to show how random football is, I cant call it anymore, if you went totally against the obvious and general consensus you'd win a fortune. Its not worth having the likes of €2,000 plus on any game these days. Liverpool were all over them for most of the first half, so much so the price came into 1.39, then Villa score from a set peice.

I'm delighted with the Betdaq football bank idea, its saved me thousands already and were only two weeks into the season. Back in the day it would have been a massive loss on United against Burnley and again tonight with Liverpool, dont think I'll ever make football pay again but this small rolling €25 bank gives you all the fun of it. Best idea I've ever had.

Annoyed to lose obviously though, wont back Liverpool again for a while, didnt like what I saw tonight. I take picking the bets seriously even though I'm not bothered with losing you know, I accept I'll end up losing a good few times with it during the season, hopefully less then 10 - 15 times. Only a bit of craic to help with discipline and money management, which has so far worked wonders, would recommend it to anyone on a sport you enjoy but cant really make money off.

Anyway, round 3 here we go! 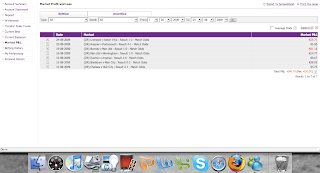