Good day today in regards to the P&L but I didnt half do some stupid things in running, got my colours mixed up more than once and luckily got away with it. Gave up at around 3-30 before I did some serious damage and went to see what the ground was like in Leopardstown. Didnt walk the whole track but at least over half of it, have to say the covering of grass was very good and while it did have plenty of give in some parts, its was fairly OK in general, pretty much as described this morning: "yielding to soft, soft in places." I wouldnt be surprised if they called it better than that in the morning but my honest view is it hasnt changed at all today from yesterdays rain.

They had a fairly heavy shower while I was there, only lasted around 5 - 10 minutes but none the less it takes away all the good work that an hours dying out does you know, Eoin Ryan also reported a massive downpour on his blog at around 2-00, which was backed up speaking to someone near the track too. Theres plenty to lies flying around as to whats it like there, I dont think any of it matters now to be honest because theres no way to make money off Sea The Stars not lining up now, but photos back up what actually happened rather than word of mouth! 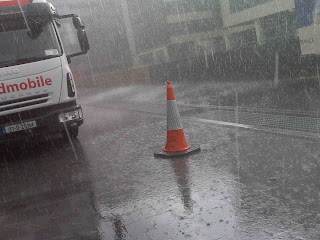 That was the rain around the track at 2-00 taken by Eoin Ryan, I'd describe the shower at around 4-00 as about the same, just didnt last as long. Now, having walked the track I'd describe the going as "better than I thought it would be to be honest after 22mm, BUT its still worse than it was on Irish Derby day in my view at the moment. So I'm leaning towards the idea, if Oxx runs him on that ground it was due to the trip more so than the ground at The Curragh. I'm still not sure if he'll run or not. I would have said he wouldnt, but he did declare! If hes being consistent on his views with the ground, he wont run. But as I said, I dont know what hes up to." Those were my words on Irish-Racing. Maybe its a case of he could get away with the ground a little on the soft side over 1M2F and not a strongly run 1M4F, but I give up guessing, the best advice here it to not do anything until you know whats running. I've only just worked out the trip idea now, in that everyone was expecting him not to declare having seen how bad the ground was and not running in the Irish Derby, but there was other reasons for not running there, the ground in Leopardstown WILL be worse than it was Derby day even if it doesnt rain until the race.

Anyway onto the cricket, and last night was a real kick in the balls, Sri Lanka were favourites for 39 of the 40 overs (20/20) and lose! I had big green on them but over €100 red on NZ, Oram bowling the last over when they needed 8, every time I've seen him hes been a total mug so thought it would be handy. Two balls and two catches on the ropes later I'm off to the gym seething. Today was better though back onto the Pro40, traded the first 20 overs of the chase like a absolute tosser though and was €90 all red cursing myself, but laying 1.2 pulled things back and was able to go all green for €60, maybe could have ran the position (was €280, -€90 at one stage) a bit longer because I got the flip flop in the end, but was a bit touchy after being all red before, and was happy with a green screen as always given what had gone before.

Today was plus €93.57 so delighted with today, but last two days screen shot knocks it back after the cricket loss last night, still cant complain though. Just maybe give up cricket games between the lesser known countries to me might be something to do. 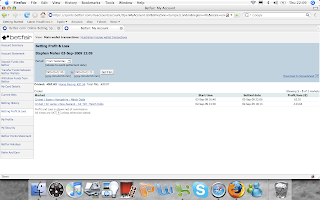