No in running today I dont think, I've a serious hangover. Today marks the return of Kieren Fallon too, so when I got home last night around 5ish after a good night out I decided to ring Betfair to get my forum ban ended seen as how Mr Fallon was allowed back. I got banned in 2007 for sticking up for up him because he was at Ballydoyle at the time I think, cant really remember what it was over but anyway, I ring up and explain you know this cock and bull story - "I was only a child back in 07, now I've grew up to be a man etc etc." God I was drunk, anyway they said no were not letting you back and explained this reason and then I gave it the whole "Do you not know who I am, I have a blog!" So if the arrogant tosser from the phone is reading this now - hello! I'm not bitter at all wha? Not bitter at all.

Anyway the champion stakes, and it hasnt rained at all last night. I called the cat this morning and he ran through the bushes and came out bone dry so no rain whatsoever fell I reckon. You know, some people walk the course, some people put their heel in, some have sticks to put in, some people even have special going stick readers, I however have a cat. Whether it rains between now and tonight, I dont know, maybe showers. It doesnt matter what the clerk says at this stage, its up to John Oxx when he walks the course.

Here we are the day before probably the biggest race run in Ireland this year, and weve still no clue whos running. Only in Ireland. I'd say Sea The Stars will run now if theres no more rain, Oxx obviously wants to run, who would have thought he'd declare with the ground soft but I suppose the Irish Derby withdrawal threw people off in the antepost market. I now put that down him not wanting to run over the trip (on softish ground obviously). This video was taken of the John Oxx team travelling up to the course this morning..

Mick Kinane has a lovely voice.

One question - why in the blue hell is Mastercraftsman 9/1 on Betfair? Are these people insane, whos laying that! AP has withdrawn him from France, although this hasnt been said out loud, I think the idea was - right we'll call John Oxxes bluff and see what happens. I dont think Master would have ran if Sea The Stars didnt declare, we shall see. Although 9/1 is massive, if you were reading what I said before York everything for the race went pretty much to plan, to a tee, went perfectly, and still Sea The Stars won, so its hard to see things turning around.

Fame And Glory is Ballydoyles number one, and I'd personally feel if he cant beat Sea The Stars, no one from here will I dont think. He was seriously fancied for the Irish Derby but Sea The Stars didnt play ball, my one small concern is we have to take on Sea The Stars on his terms, over 1M2F. But hopefully with the ground on the softish side of good, that will even it out a bit more. I must say I'm very bias, I love Fame And Glory and have always thought he was the best in Ballydoyle all year, thats why I backed him antepost for the Derby, I'll think he'll win tomorrow for what its worth.

AP told me he has so much speed, he could win a July Cup. Only messing! But Johnny was down in Ballydoyle this morning and reports everything as "perfect," so I presume its perfect and its going to be a "classic" Champion Stakes. Hes pretty confident. Like you know, if Fame doesnt beat him, we might as well give up trying.

Its funny how the media jump onto a horse, Sea The Stars is the best horse for 20 odd years, now I never compare old horses with new ones as I never see the point. Take each year as it comes and each horse as they are, and accept how great they are in their own right, stop comparing! Its like this talk now is Henry Shefflin better than DJ Carey, load of nonsense, their both brilliant in their own right, one was years ago, one is playing now. Things change over time so how are we suppose to know. Luckily enough when your down in Ballydoyle each year we have the best horse the stable jockey has ever sat on, so its fantastic you know, we dont compare.

I havent actually talked about form once in this I know, everyone knows what each horse has done I dont think theres any point going into it. Its going to be an amazing race if they all line up. One thing I would say, I'd be annoyed if John Oxx withdrew a couple of hours before the race, thats not fair to people paying in, if youre going to declare with soft ground now he cant go withdrawing when everyone is there waiting for the clash. I havent been nervous the day before for a race Ireland for ages, I cant wait. Still not fully sure what tactics Johnny will go for, but I would reckon it'll be close to the same as York, get Fame And Glory to go before Sea The Stars does and make him catch you. Fame And Glory is without question our best hope, so if Sea The Stars wins, he really is that good. God its going to be some race, really hope Fame And Glory wins.

I'd also like to point out that while Sea The Stars is evens on Betfair now, if hes a certain runner I cant really see the price coming in an awful lot. If everyone is saying Sea The Stars is the best horse around, well surely that makes Fame And Glory the second best horse around? To finish second behind him at Epsom and then win the Irish Derby, hes a serious horse in my view. I'll be winding everyone up if Fame And Glory wins that hes the best horse for 35 years, just to annoy people that come out with that sort of stuff.

As I type now a short heavy shower has just passed, uh oh! It never stops. I've backed Fame And Glory at 7/4 antepost so Sea The Stars not running is fine by me! But I'll be looking at a loss of around €350 for the challenge if Sea The Stars does indeed run and win, and much more away from the blog, and probably more on course. So to say this is important would be a bit of an understatement. Hopefully its a good race and everyone comes back safe. Come on Johnny! 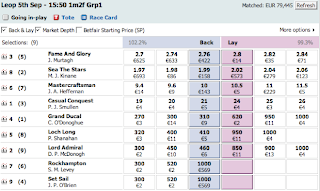