"Hes just that good." Those were my exact words as Sea The Stars past the line, he was too good. While I'm not going to have orgasms over him or claim to have seen the "greatest horse ever," I do think he is special after seeing what he did today. You know, what do you say. Again everything went exactly to a tee from Ballydoyles point of view, lightning fast pace and Johnny to kick on the bend before MJ went. I described the race to everyone half an hour beforehand for feck sake, Sea The Stars was still too good for him though. Fame And Glory is a fantastic horse too, hes very unlucky to meet such a superstar, if you think of what he would have won if there was no Sea The Stars this year. But again, theres no doubting Sea The Star has some amount of class.

I actually give up trying to beat him after today. This is coming from someone who isnt a fan, well maybe not a fan isnt the right words but when youre trying to beat him all year you know what its like, I dont think he'll ever be beaten (unless he travels poorly on the plane over to America). I reckon today was the best Ballydoyle could offer. As I said, plans went perfect, "kick now Johnny," was the call watching it - he did. One "go on Johnny" later and I knew it was over when I seen what was coming. I'm not as gutted as I thought I'd be, simply because the only feeling I had after the race was "what can you do?" Hes just that good. Hopefully Fame And Glory can win the Arc now, I'd like to see him win a really big one before the end of the season. But today, totally no complaints, best horse won. I'll not buy the Racing Post tomorrow anyway cause I know whats coming from that lot! I'm sure people will row and row over how good he actually is, no one can answer, which is normally the reason why everyone rows over it.

Another thing to remember is at the start of the year Coolmore sold or retired a good few of their older horses just keeping a select few, Yeats etc, few raised eyebrows at the time and the reason given was "our three year old crop is amazing." It pretty much is when you think of it, Rip, Master and Fame - throw in another few. Still Sea The Stars is too good. I'd personally love to see him have another race over 1M4F, just to see a different test from his last three runs, but hes fantastic. I'll tell you one thing though, hes no Harchibald. Thats a fact!

Apart from that, I had a really good day. Got duly slaughtered on the Champion Stakes obviously but everything else went well. I was actually blessed, first thing I did when I came in the door was lay Durham at 1.3 in the cricket, just for looking at the runs needed off the amount of balls left, no other knowledge of what had happened before. If Essex had been 1.3 at the time I'd be probably laid them instead type of thing you know, it looked an even game at the time. I should stick to this mug betting its far more profitable than trying to win some race at Leopardstown. You'll Be Mine and Rainbow View were good results, although Dynasty knocked things back again.

I'm just absolutely delighted with todays P&L line considering whats happened. Going to watch the Ireland game now, hopefully they'll nick a 1-0 or something, more likely is a 0-0 and everyone sitting there thinking thats 90 minutes of our lives we'll never get back, but nonetheless its great to be Irish isnt it.

Never been so delighted copy and paste a P&L like that! I have on the little about me bit, "Living proof its better to be lucky than smart since 1988." Thats a certainty, dont mind skill, discipline or staking. I'm just a jammy fooker! How in gods name I managed to not lose a fortune of John Terry weeks wages proportions today, I dont know. 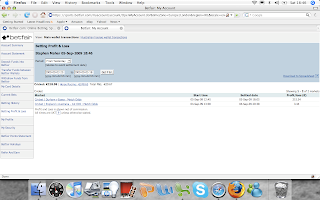