Facebook status 4 hours ago: "England chasing 250. An extremely slow over-cautious start with wickets falling regularly looking likely, with the run rate getting too high for the middle order, when their out due to the pressure you'll then see a great effort and come back from the tail enders, anyone seen this happen before no? I havent. I think they'll do it though, if they dont, someone remind me of what a tosser I am backing them please."

Now, I'll hold my hands up and say I was totally wrong with the slow start, they got to 74-0. Then well er, it was embarrassing. Luckily enough I've traded on England games enough times to know never to trust them, laid off and ended up not losing. But jesus, how do you not chase down 250 from 74-0, on a flat pitch, oh dear.

I know its grand and handy putting up a screen shot of a game that went well and is all green, but thats far from what happened at times really. The idea of it anyway is to show how important laying off is in cricket, alright I know it worked today and its great saying it after, but just in general I cant stress laying off enough. When the teams are evenly matched and its a fairly close game, the odds fly around more than Kerry Katonas knockers on a bouncing castle seriously.

I'd also stress that if you do something wrong, its important to get out of it quickly, on any sport I suppose but cricket can move quickly, dont sit there hoping, go all red. I was seething having breakfast this morning because I broke a proper important rule for myself today, no betting while the first innings was on. The €200 at 1.7 and €100 at 1.68 on Australia was done while the first innings was on, then laying €280 at 1.84 was going all red, it took a wicket for me to come to me senses. Very annoying to break your own rule thats in place to stop you losing money, fair enough if you lose, but I hate stupidity. A slice of toast and a calming down, come back €25 all red and start again.

It went well, I definitely could of made more money going all green, but well sure England should have won, lets be honest. The laying 1.05 for €200 is something I really like doing when I have green, always a chance of a bounce out, always. The other day I needed a 6 off the last ball for €10,000 laying 1.01, its well worth it. But the main thing is, no matter how good it looks lay off, and if youve any worry get out. Those two things are not as important as remembering not to trust England with anything though, anything.

Anyway, what a cracker the All Ireland final was today, seriously good stuff. Felt a bit sorry for Tipp, it was hard watching the game not to be shouting for them. Emma didnt even know who was playing this morning and here she was glued to it after 20 minutes, great advertisement for hurling. Kilkenny are amazing though, up until they scored the two goals, I think the comms said they had five shots for a point, scored five points, thats the class of them. Werent at their best but still keep going.

Had a little experiment on the tennis last night, I'd be thankful if someone who followed tennis could leave a comment and tell me if I picked the worse match ever, the mens game, Verdasco v Haas..

Never again. From my amateur view of the game, Verdasco was a complete mug and Haas was a bottler. So what do you do! Basically, what I learned was you need a massive set of balls for trading it, and theres some amount of choking. I cant handle that. From an odds point of view, they have so much factored in that I dont/cant understand the market. It sort of moves for no reason. Its like, the odds are expecting something and when it doesnt happen or slightly changes theres a massive readjustment. It appeals in the sense that if you call something right, the odds swing is massive and youre rich, but it also stuck me as a game that if you got one match wrong, youre finished, kaput, bank gone. I'll not be back in a hurry anyway, but at least I won €5.30 for the lesson.

Its been a really good week overall, would have been a fantastic one P&L wise if not for the Champion Stakes but thats the game. Just heard this minute Johnny got an awful fall in Dundalk and has been put in a neck brace, I hope everythings OK but I'm told hes conscious so thats good news, I havent even seen the fall.

Its been a brilliant weekend for sport, Sea The Stars, All Ireland final, Ireland winning 2-1, College Causeway (next Saturday night will be fantastic if he can win). But its all completely knocked back by what happened in York to Jan Wilson and Jamie Kyne. All I hope for is whoever started the fire gets the worse possible sentence they can give the person. The most heartbreaking thing from my point of view is that, allegedly (I stress that word) the two young jockeys that died were allegedly not the target of the alleged attack, I cant stop thinking about it really. This is only what I've been told from other jockeys now, allegedly it was all over relationship trouble. Obviously all of this might be way off the mark and is just rumors at the end of the day. Its awful to think things would ever go that far you know, I know weve all been out with a nutter or two as some stage, but ah listen I dont even have words to describe how I feel. Its got to the stage where you cant even have a night out without seeing a row or somebody wanting a row, I dont whats happened. My grandad used to always say "your ego will heal quicker than a broken jaw." But when did everyone start to go mental killing people, when did everyone start carrying knifes and guns etc. Theres no such thing as a fair fight anymore, its people trying to actually kill people these days. 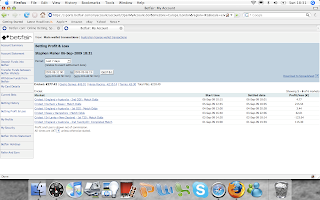