Spooky date isnt it! England are woeful at one day cricket. The most annoying thing is the same thing happens again and again and again, yet nothing ever changes. Anyway, seriously difficult game to trade this evening, Australia had basically won because England didnt get enough runs first innings, the bet was could England bowl them out. I hate these games. I didnt trust the Aussies to lump on them, and after a few collapses the last few days the confidence wasnt there to do so anyway. But they scored at a slow enough rate and England were bowling very well, so nerves came into it and England were well on top for the first 10 overs of the chase.

This is the worse possible thing to ever happen in cricket trading. England keep things really tight for 4 or 5 overs, with Australia scoring maybe 2 or 3 runs per over, so the odds on Australia edge out bit by bit, but not much (maybe 15 ticks), then boom a 10 run over and the price comes in 30 ticks. Its catching a falling knife trading. Thats the hardest possible way to trade because youre fighting the market the whole time, you might get lucky and get two wickets or have it going for you for 5 overs and then it can all go kaput with just one ball and a 6. I've been around long enough to notice at this stage, so I just backed Australia to win and left it from the start, €50 at 1.4ish. I really like backing after a wickets fallen in these type of games too but just wasnt trading it after the last two days.

I wasnt going to post this evening cause I didnt really have too much to say, BUT I've just seen this from Paddy Power..

Without being a name dropping tosser, myself and Mr Fallon go back a bit from his time in Ireland, obviously with the same connections. We'd be very far from best mates because of the age difference but we can talk about stuff freely you know, about horses obviously. Although I'd know absolutely nothing about his rides in England and we dont speak often like, it was all to do with the Ballydoyle horses at the time. Now, I asked him the other day should I back him for the title, half joking half serious chat, he said hes going for it and really wants to shut a few people up by winning it. This news is in the paper every day anyway sure. But he said to me seriously to back him anyway and I trust him (even if many dont!), so I rang around, the first bookie was Paddy Power and they offered me €200 at 3/1. The bet asked for was €1,000.

So, I have serious issues with the above statement from Mr Power. My phone account isnt even a big winning one, probably around levelish I'd say and included are a number of big loses from last year, Ryder Cup being the biggest so I dont understand we he'd only lay me €200 when some person can have €7,000 freely, hmmmm. I opened a new online account for the blog, you might remember I used to back a horse each day in Ireland during the summer before giving it up, €50 a day normally, few wins few loses on the account same as everything really. They'll offer me €241.50 at 5/2, heres the screen shot.. 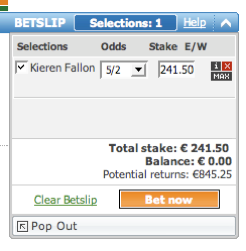 God I hate liars, €7,000 they must be taking the piss, at least they got to change the price to 5/2 for no reason though eh, why cant they just change it and say nothing. Anyway, some people have serious issues with Bet365 taking a bet from them, well they took €1,200 over the phone at 3/1 so fair played to them (my chelsea game losing bet of €5,500 was with them last year!). Having spoken to the great man I'll be having more on him nearer the time, around next March when the season starts, he'll probably be around 2/1 or so but theres no need to have it all on now sure with a long winter ahead. I've asked Bet365 and they'll lay me another €1,500 so I might have that. And some for this challenge too, maybe €500 - €1,000, depends where the P&L is at the time I suppose, could be gone skint like! Its a long way off. But seriously Paddy Power, disaster, I actually had a lot of time for them before reading that today.
Posted by Stephen Maher at 9/09/2009 10:38:00 PM