Somerset collapse to 205 first innings. Essex need 206 to win. Sky say Chopra has broken fingers and wont play. Essex are 1.5 to get the runs, €300 on thank you. "Cook for England" uh oh hes out for 4 to a straight ball. "Napier for England" uh oh hes out for 0 to a straight ball. Essex are 12/3 after 4 overs, tossers. Here comes some bloke Maunders, jesus he looks like Graham Smith, no wait hes just a bit fat looking too. James Foster for England. Oh my god, the wind is bowling too hard, the lights have to come down. The games being called off, Somerset are 1.08, Essex need 18 off the next over to win with D/L. Foster out, I've always liked Matt Prior anyway sure. Wait uh oh lads the winds stopped, lets play on. Fantastic. Two wickets for one run, balls. WAIT! Heres Chopra, he seems to be alive, theres hope yet! Market goes from 1.1 to 1.8, Chopras out for 6, shouldnt have bothered the tosser. Somerset back to 1.2, Essex need 80 odd runs off 80 odds balls. The fat bloke who looks like Graham Smith just hit a couple of 4s, woohoo. Essex are 1.4, ah no the fat blokes out. Somerset are 1.4, some randomer hit a 4, Essex are 1.4, GSM Essex. A bit confused? I was too. 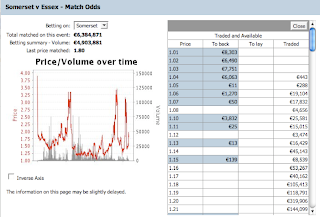 I dont exactly have a story for it really, anyone who watched it will know, it was the most bizarre game of cricket I've ever watched. You could have won thousands, absolute thousands. In the end I was delighted to come out just €90 down. As with everything else, there'll be some serious losses for some people too, Somerset were matched at a low of 1.04, I have to say I thought Essex were a certainty to chase it down and had €300 on 1.5 at the break, only thing was after 12/3 it was kaput and looking at 1.2 Somerset, hence being delighted with only a €90 loss at the end. Even though if I had of rode it out the whole game I would have indeed won, however I wouldnt have been able to collect it due to a heart attack at some stage I have no doubt.

Funny old game this gambling lark, I was messing about on the Sri Lanka game earlier, keeping my liability under €30 the whole time and ended up winning €17, not bad like. I had the odds moving my way the whole game like a good looking version of Moses. Then up it to the usual €250 - €300 for Sky games and have a bit of a mare. Can never explain these things. Anyway, I have a sheet here it just occurred to me to take a screen shot tonight, basically this is how I work out where the games going. As you can see its pretty simple really, but it just gives me an idea whats happening and where the momentum is going, I'll then see what the odds are doing and decide what I'm doing then.

If I'm happy with the run chase I'll tend to let the market do what it wants, once I'm happy with the sheet going my way you know. This is where I get the sitting here shaking my head at the market moments from, also explains why I run into some big losses the odd time of over €300, but big wins too. If youve been reading my blog a while you'll hear me saying stuff like "oh it was easy" and "they should have got it" or "England are shite" this sheet is normally where I get all that from. Theres logic to my waffle believe it or not. Maybe logic that makes no sense whatsoever to other people but logic nonetheless. It also calms me a bit so I dont really get caught up in the market panic like everyone else. Dont mind the RW (rough work) part on the right, thats just waffle, D/L, runs, wickets, anything that happened you know. Its an unbelievably simple way of looking at things, but at the same time you know exactly where the game is at every moment. 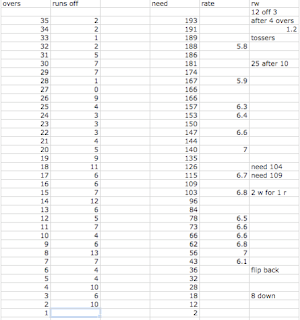 I also had a really frustrating day on the horses in running, it was hard enough with the meetings that were on and just basically things werent going well really. Lack of money in the markets and lack of getting matched, two things getting on my nerves. Was losing until Mister Tee won in Dundalk, put it up on the side this morning, didnt exactly plan to back it as big as I did though for the challenge at the time. But I did spend the morning wandering around town backing it so I suppose it worked out alright in the end, missed the 4/9 and got pissed on mind, ground will be heavy the weekend I suppose. The bet at the time for the challenge could be seen as chasing though. Tad annoying, but that type of day.

Anyway, just a screen shot to sort out the loss last night and todays results. I have to say I'm getting an awful lot of collapses lately for some reason, might just try keeping the liability under €50 on cricket for the rest of the week. Doing my usual tonight, taking the Betfair balance down to €200 after a loss, busy enough tomorrow so wont have time for the horses, which is probably a good thing after today. But just need a few steady days to settle the ship now I reckon. I'll never run out of time gambling so a couple of days trying to win €20 will be the aim and then kick on as usual hopefully. 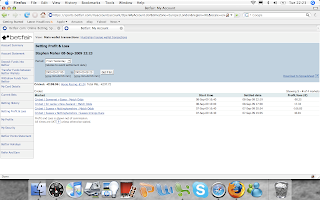