Good enough card for a Thursday evening and pleased they got the go ahead this morning. Only going to talk about one race here and thats the 4-55.

Purple Heart let an awful amount of people down on his last run at Gowran. Luckily enough I was on holidays at the time so I dont hate the horse yet. He still has to answer the question of does he want to win looking at that race, but he did look green at the same time and maybe hes just a slow learner, reading the RP in bed this morning they seem to basically say the same thing although add that he has a high head carriage.

That race has actually worked out seriously well since, I've always liked Mister Tee and he ran a cracker since that race finishing 2nd to Cape Blanco in the futurity and then winning easily in Dundalk, against no one good but won anyway. Sebastian Flyte who won the race in Gowran finished a good 3rd in a Group 3 at The Curragh on ground he would have hated so the form is pretty solid looking.

The main opposition today appears to be Bygone Age for Weld and Reggae Rock for Ger Lyons. Having gone through their form, I dont see Bygone Age beating Purple Heart and would give up on Purple Heart if that happened to be honest. So the main danger I see is Reggae Rock, although he seemed to take a step backwards on his last run from the one before that. But I've also noticed Mark Twain was 3rd that day so that was hardly the strongest of maidens by Leopardstown standards.

Basically the long and short of it is Purple Heart should win handy really, the only question is does he want to. I'd be having a far bigger bet on him if he didnt let everyone down the last time, €50 is enough and we'll see how good he is from here, hopefully Johnny will be near enough to the front if not make the running, I think thats the best way to go, he doesnt seem to go through the gears quickly but he has gears nonetheless. If people start to take him on later on Betfair, I'll have another poke nearer the off. 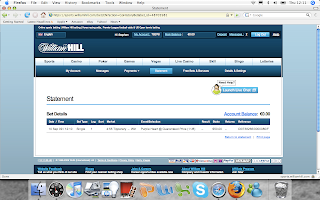