http://www.youtube.com/watch?v=rlxA9N5079U
It comes up mental looking on the blog when I try to have it here, so you'll have to click on that to see the Derby final.

No matter how many times I watch it I still smile seeing College Causeway going down the back straight. It was the best Derby night I've ever been to by miles, the crowd was immense. The noise at the 3rd bend and then at the last to the finish, I've ever heard anything like it, it was amazing. Hairs on the back of the neck stuff like. An absolute pleasure to be there to see him win, it was as if every single person backed him too. Unbeaten in all the rounds, and a track record to boot. An aeroplane.

Been nursing an awful hangover all day today so done nothing but lie on the couch, lost an odd tenner on the cricket and won an odd fiver on the GAA messing about. Yesterday I did a lot more good work though, but Alfred knocked me back to level after he lost, he went from cruising to reverse fairly quickly, probably the last run left its mark and we wont see him until next year, I'd like to watch him on his first run next year before backing him again too. Chinese White put me well ahead before that though, and it was sad to see Yeats finish last but I think everyone knew it was on the cards alright. Apart from going up and down at The Curragh, the only real result of substance over the weekend was College Causeway.

Been another winning week overall, if not much, it was seriously knocked back by the boxing result (-€140), the great Notts collapse of 2009 (-€165) and losing €90 on another insane game of cricket. Apart from that no other loses, bar a few on the horses but turned out to be a winning/level day you know. If I could cut out the loses it'd be fantastic but I suppose theres no way of doing that, just feel more than a tad unlucky this week with whats happened with the three of them, the boxing was terrible, I was robbed! Anyway, alls well that ends well. Good bit of sport on this evening but just gonna settle down and catch up on x-factor recorded from last night instead, I get to bet on the shows in a few weeks so it goes towards research you know, I'm basically been made watch it here so I might as well put it to some use, cue -€500 appearing under "specials" next week! Watch this space. 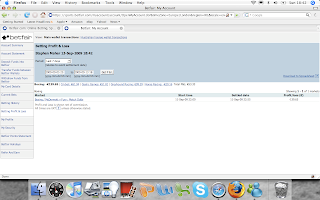