Was anyone just watching the boxing, McDermott v Fury? Oh. My. Fooking. God. Er, I dont know what to say. As Jim Watts said on sky "has the ref got the names mixed up" Fury by 6 rounds? Please. If it had of been 1 round maybe you know, but ah here 6? Fair played to a man as respected as Jim Watts to say what he said. Fury started the fight at 1.18 but wasnt doing at all well, I had him 3 rounds down after 3 and laid 1.4ish, wanted to lay more at evens after the 5th round but had my fill already with the days cricket profit. I'm shocked I actually lost. I've been mugged!

And so has everyone else, look at the graph below. Should I have greened out? Well you know easy after it, but no for me, McDermott was 4 rounds ahead, ahead on skys cards, everyone at ringside and David Haye who they just interviewed for good measure. I'd normally be seething but I'm not even seething because its such a farce? I'm speechless. Never seen such a fix like it. Ever. Sorry for calling it a fix, but anyone who watched it will know. Cant actually believe it, the ref scored it in a way that McDermott only won 2 rounds. Impossible. He was in the ring, what the fook was he watching? See, I'm not seething!

Seriously, I think the graph speaks volumes about how the fight went. We cant all be wrong surely. If you lose, you lose you know, but not this way. 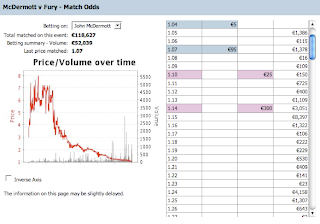