It was half one in the morning and I was standing in the middle of the room shouting at two blokes with rackets hitting a small yellow ball to each other for the last few hours, I think I'll start with that when I eventually visit gamblers anonymous, what you reckon? Seriously, what a match. €400 on Federer wasnt the smartest thing I've ever done but laying off at 1.06 certainly was.

Delighted with it at the time, so much so that I was afraid to touch my book after it went 1-1. Mainly because of what had happened today. Shocker on the horses, first race and €40 odd down it was a long way back. Its really hard to play when you get behind early for fear of making it worse, I'm always careful not to chase but its human nature to want the money back as quickly as possible, it tends to ruin how I play because I'm fearful of making it worse rather than better. It was the only race I played anyway with my position on the cricket at the time.

Now, no real complaints before I harp on about what happened. Just a gutted feeling after the event. I somehow convinced myself Sri Lanka were going to win while India were still trading at 1.25, how this happened I've no idea but anyway. My book looked like this after a bit of trading throughout..

I'm sure there'll be plenty of traders screaming what a tosser for not going all green, but I cant explain it myself, thats how I felt after the event - I wanted to have gone all green. But its always easy after the event isnt it, I was just disappointed. Youre sitting here thinking why didnt I go all green while looking at the price go down to 1.01, while this only occurs to you when the price is 1.01, because it never occurred to me at 1.25, what a position, disaster. I suppose naturally I'll always be a gambler at heart and love a run chase, I dont know, countless times I get myself into these positions only to not "cash in" let it run and it all goes kaput. You'd think I'd have learned by now like. I was certain they'd chase it down though, 80 needed off 60, I'd take that every time. I really need to work on the actual "trading" part of my betting though. I have no words to describe why I do it, it wont change either because it seems to happen again and again.

Its horrible fighting the market when India are playing though, most of the money in the market comes from India so naturally its going on them. Which totally leads to false prices sometimes, take this for example - Sri Lanka need 6.1 runs an over to keep with the rate and the India price is at 1.18, Sri lanka get 10 runs off the next over - India price goes to 1.2, then Sri Lanka get 3 runs off the next over - India price goes to 1.15, Sri Lanka have scored 13 runs in 2 overs keeping up with the rate yet the India price drops just because of the way its happened. Its awful, obviously the market corrects itself in time, but this is my massive problem when greening up, I was never greening up because I thought India should be higher at every point. But then, it gets to the stage when you say, well when does value outweigh the getting rid of liabilities you might have or actually cashing in some green. I naturally look to let it run because I love a run chase but you have to say to yourself money is money, I never hear this little voice until after the event though.

Anyway, some things never change. Went for pizza and didnt play the second game because the head was gone. Was absolutely delighted with the tennis profit after to make it a winning day. Looking at the graph below of Federer, my little moan about not greening up is a drop in the ocean compared to the sums traded at short prices for some people. Hopefully they got out of it alive. 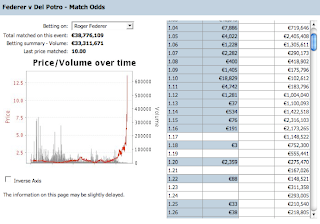