Really delighted with today, cant say I did much at all, didnt get to bed this morning until around half 6 with the Mayweather fight, then laughing at the interview after for a good half an hour. Mayweather is the daddy though, absolutely unreal. Well worth staying up and hes just amazing to look at, not everyones cut of tea but I like him, the way he goes on adds a bit of interest to it, I think hes funny. Afterwards, the bloke who interviewed him was a tosser, fact! And the commentator continuously saying "lovely jabs there" was also a highlight, 5 o'clock in the morning, these are the things that keep you going.

Didnt resurface until around 2-15ish so missed what happened to Australia, England were certainties to chase down 177 but I didnt have the bottle to back them, they are England after all like, got a good trade out of backing Australia at 100/1+ knowing that England never win without making it a little difficult and losing a few wickets, was happily €50ish all green. No other team in the world would be still available to back at 1.01 when they needed 10 runs from over 60 balls. Anyway, 1-6 to the Engerland.

Mickey Owen scoring in Fergie time, er I mean injury time, at Old Trafford was fantastic as well. I knew he had it in him. I'd like to think I played my part in todays victory, it was only last week I took Owen and Fletcher out of my fantasy team. Awful lot of nonsense waffled on about the "extra time" sure look a team still has to score, defend until the whistle or its your own fault. Two goals and a sub, I could see where they got the extra bit of time from. Anyway, "4mins ET" means play until United score, I thought everyone knew that? I loved when they showed Fergie laughing with the 4th official after the goal, with Sparky in the background seething.

Couldnt get a handle on the All Ireland final at all today, pretty happy to only lose an odd tenner as I had liabilities of over €100 on both teams at some stage during the match. Couldnt really make my mind up. I thought Cork were the "better" side, i.e. had more chances and more of the ball. But they missed an awful lot of easy chances, and exactly the way the hurling was, when Kerry got a chance they put it over. It was hard to trade you know, Cork would be all over them for 10 minutes, have 5 chances and not score, Kerry would have one chance and then score. Thats the class I suppose. Its amazing how much experience counts in a final. The best team won in the end sure.

Again like last week, absolutely delighted with how this week went, been a great week and enjoyed every day. Only one sizable loss, €250 on the Aussies runs market, apart from that no complaints and an easy week. Confidence was up and as I said had a really good time, thats all that matters really I reckon, if you enjoy something youre far more likely to do well at it. The one thing I didnt like was the football bet on Betfair, that was disappointing, thats what the Betdaq bank is for, wont happen again though. Betdaq football bank is up to €222.22 now with Real and Barca winning. College starts on Tuesday so I suppose things will change massively but at least I'm in good form so hopefully can keep it going with the limited time on offer. 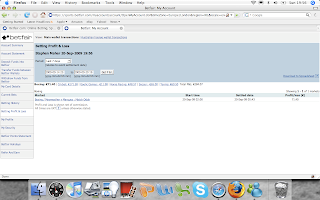 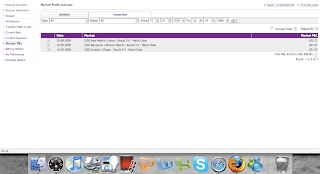