And its a losing one! It wasnt the worst day I've ever had now, just one mistake (-€130) at Kempton cost me, well I actually wouldnt call it a mistake like I just laid the winner, and its only a mistake cause the horse won. Cant say I'm that annoyed, these things are always going to happen when you play in running. I reckon I had my angles mixed up, and hence laid it at too big a price than I should of, cant say I like Kempton really, every race seems to turn into a sprint from the home bend and everything happens quickly. No complaints with the bet though, I have to say after it happened I was pleased with how I came back, I basically said to myself theres zero chance of winning back €130 in running on a Monday, in Ballinrobe the pictures were flicking on and off, Leicester was on ATR, Hamilton clashed with Ballinrobe if it was a 3 miler and Kempton had already scared me off. I just played normally as if the loss never happened, no idea why or how I got into that mental state, suppose it just depends on what mood youre in at the time. Accepting things ("shit happens") tends to help me an awful lot. Cant win 'em all.

Mr Murtagh returns tomorrow to ride in Fairyhouse, while I return to the humble surroundings of college at 12 bells, at least its not 9-00! I'd have liked for there to be more sport on today for my last hurrah if you like but I suppose you can only work with what youre given, shame theres no cricket tonight though. Cant say I know much about Johnnys rides tomorrow, couldnt even tell you if hes 100% race fit, I dont know, but hes been riding work anyway. I'm really looking forward to seeing a Prendergast horse tomorrow, Hedaaya in the 3-25, she finished 2nd to You'll Be Mine at Leopardstown last time so be interesting to see how the form works out, be disappointed if she couldnt win that race.

And Rip Van Winkle is going really well, he'll take an awful lot of beating on Saturday, trying to get on a flight that has me coming back that night because the Goffs Million is on Sunday, its turning out to be a fair bit of hassle though. Hes a bit of a hooer in that hes always been amazing at home so that doesnt make him a certainty, I've learned this through the wallet, but I reckon Johnnys worked out how to ride him probably now since Goodwood, the only small worry would be does that set up the race for Delegator to swoop past late on if Rip goes early. Thats the only question, but sure look I've ever rated Delegator and would be majorly gutted if Rip wasnt good enough to beat him, not worried about anything else either.

Dont know if anyones a fan of Danehill Dancer or not but you should like this if you are, got sent a photo of him from Coolmore Australia yesterday, he looks fantastic, its as if he thinks he owns the place and hes guarding whats going on in the photo. Its Coolmore Australias most busy time of the year around this time. In the pictures, theres one of the landscape from the office, the place is looking in great nick, who wouldnt want to be a horse. I actually only just remembered from looking at the photo that the whole place flooded and was under water this time in 2007, managed to dig out a couple of photos of it too, the last two.

It happened so fast that the horses were stuck out in it too, the lads had to paddle out in a boat and somehow attach the bridles to the boat to lead them to dry ground. The 3rd photo is them coming out of the water, but if you look in the right background you'll see the white roof, thats the roof on the barn! Anyone thats been in a barn will know how high they actually are from the stable doors etc, so you can picture how much the water level was over the horses heads out in the paddocks and how well everyone did to save them. Its nice everyone was alright in the end and we can joke about it you know, not only did AP teach them how to win a Group 1 but he also had them Champion swimmers too, what a man. I'll tell ya something though, its a far cry from being helped around a pool by two blokes in Tipperary to trying not to sink for your life in the middle of Australia! 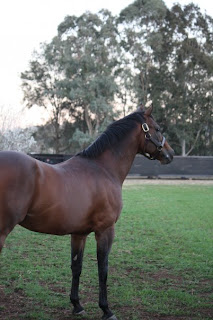 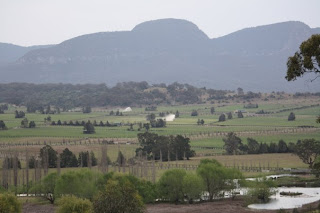 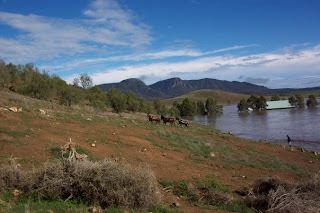 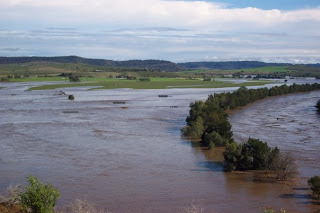