Now, before reading any further, let me say this - I know very little about politics. Thats probably an understatement too! This is all gambling logic.

A no vote Lisbon is massive at 9/2, I cant sit here and not back it. We voted no last time and this time it really is honestly 50-50, the general feeling is its too close to call, everyone you talk to will have an idea of what there voting, but none of them can actually properly explain what were voting on. Theres too much clouding of the issue, which leads to confusion, which leads to doubt, which leads to people saying no. Its like when you ask a woman to marry you, if shes not 100% sure youre rich shes always that little less likely to say yes. Only joking. Women are great.

Sure look it could be yes, it could be no, I dont know. But 9/2 is massive for something which is near enough a nailed on 50-50 chance. In all the latest local polls its showing the results at 55-45 for either side swinging around, not counting the undecided votes. The latest poll today carried out showed the no side ahead 59% to 41% (over 200 posts on politics.ie about it), these things change every day like I suppose, but surely for something that changes so often and people are unsure of should be a little closer to 1/8 yes and 9/2 no.

Theres also a huge possibility that this could turn into a vote on the government, which no one seems to like at the moment as everyones having a moan, obviously the government have very little if anything to do with the vote, nothing actually, but with them pushing a yes vote so much, it could end up the people saying no just to go against them. You know theres a lot of things that could happen but it'll surely be close come Friday week.

Anyway, not that I'd ever try to manipulate a person in to voting no to Lisbon, but if we all back 9/2 with our friends at Paddy Power and then vote no, sure we'd make a few quid out of it wouldnt we? We could all have a few drinks afterwards with the winnings, sure it'd be great craic. I'm off to recruit in the morning!

One last point, you know the way were having another vote "in case we meant yes" because we voted no the last time, if yes does indeed pass this time, can we have another vote in case we really meant no? 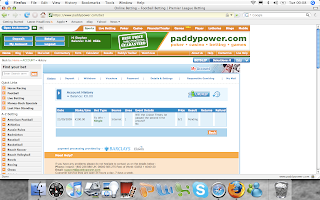