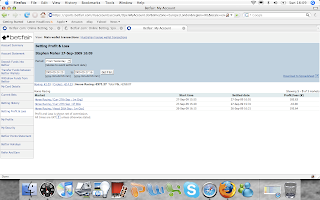 Only just discovered if you put in your own dates to Betfairs P&L it pulls them up, learn something new every day man! Thats the last three days. Anyway, Rip Van Winkle and St Nicholas Abbey were really good results this weekend, for the challenge but more so personally. They were brilliant. St Nicholas Abbey has some amount of gears.

Not much else happened apart from that, lost a small few quid on cricket messing around while waiting to leave for the track etc, and got a bit lucky on the boxing too with Dunne getting beaten, didnt really have a strong view all this week but was just trying to guess the market, but the first move was €200 on Dunne. Same story on Friday night too but picked the winner that time, so it swings both ways.

Got a new college timetable this week, really like it, it'll most likely change again but I love this one. Have to be in 9 to 5 on a Monday but because I do so many hours that day, that basically leaves me with loads of time off the other days, meaning I should get home each day around 3ish. Fantastic. Means I can sort of carry on like normal, take Monday off and a couple of hours each day, sure it'd be just like going to the gym and playing golf during the summer. Except not fun.

I've only noticed last night that Paddy Power dont seem to like me anymore, I dont know what I've done either! All my accounts are limited now to €150 - €200ish range. Er, I think it was the Fame And Glory antepost Champion Stakes bet, but that lost? I've been limited with the Fallon bet, Rip and St Nic again today, dont really understand why if the horse lost but anyway. Cant have a proper moan because it wont affect me at all, most or if not all of my bets are around the €100 range, just when I want to have a real cut on one like this weekend, Powers isnt the place to go anymore.

Just watching the Saffers against Engerland here, its impossible to call, hence the early post, try to avoid getting involved but without betting I'm gonna say Saffers chase this down! I've also lost a good few quid on innings runs this week (New Zealand collapse), think I should avoid betting on it from now on in, its really hard you know I dont bet on the match odds while the first innings is on, and I have to kind of watch the game to see what the pitch/bowling is like, sometimes I get drawn in to betting on something. Which is a bad thing for discipline I know, lost €250 this week on innings runs markets while the overall loss in only €160ish, so I'd be in profit without it. Little stupid things always come back to me at the end of the week where I could have done better, probably being harsh at times but always looking to save a few quid. 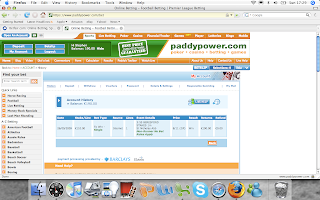 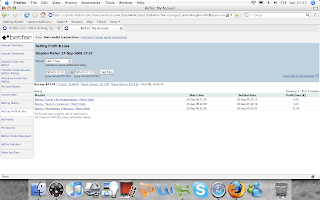