Without sounding a bit mean to The West Indies, they are shite. Most people know I love them really and as much as they annoy me, they are my favourite team, no idea why because they couldnt seem to give a toss half the time. But anyway, this team isnt even the 2nd team, its the 3rd team they have been sent over. And they are pants.

I've watched them play a little bit against Bangladesh and came to the view that, their bowling will go around the park and their batting will be all out fairly quickly, might get to 200 or so but that'll be tops. I will not under any circumstances have a liability of over €50 on them at any point in the whole tournament. This is fact!

Anyway, not much doing in the match odds as theres only one winner bar a massive collapse from Pakistan, one bet really caught my eye this evening flicking through the lesser markets. Darren Sammy to be top West Indies Batsman at 12/1. Thats massive surely? Hes the only one that can really play a bit in that team, hes down at 9 in the way the team are named there but surely he'll bat higher. Hes by far the best player in the team, hes probably the only one can will come out of this with a bit of pride.

The one worry I have for the bet is, the Pakistan seamers arent too great so its highly likely the opening batsmen could get quick runs. Having said that they arent good enough to score a 100 really, so would be looking at around 50. From what I saw of Fletcher he doesnt seem the type to bat long. Dale Richards is the one that scares me a bit having read this: "He is naturally aggressive and is pretty good against pace bowling, but still faces the criticism that he fails to convert his starts. This tournament presents a great opportunity to showcase his talent."

He might get the easiest runs against the Pakistan openers but even still the failing to convert part gives me hope of him being like the rest of them. Sure look, its a bit of a mugs bet when all is said and done, but Darren Sammy 12/1, hes the best player in the team for gods sake. Well worth €100, and a little more in the shops in the morning, bookies dont really like these type of bets, the max allowed was €150, which suits me grand and handy.

Without putting the Indian sign on him, go on I'll say it, hes a fooking certainty!

Joking aside, he should be well up there, he'll definitely bat anyway even if they have him at 11 (they wont) because this shower wont even last the 50 overs so he should get a good crack at getting a 50. I reckon he'll bat at 5/6/7, he scores quickly and got a 50 in the warm up game the weekend so hes in good touch. Hopefully they might even take the 2nd batting powerplay when hes in, might be around that time, who knows with this lot. Hes there best player by a country mile though, as I said well worth €100 at 12/1.

For anyone thats a bit insane and thinking of following, my er, advice, hes 14/1 with Totesport, they wont let me bet, but if you were to take money off them it would feel as good as a winner to me you know. Now, cue him being out first ball. 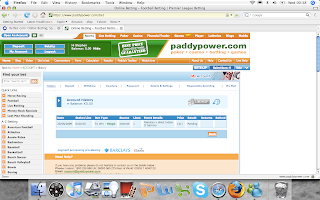