Football Bank Down The Swanee

Of all the teams to pick tonight, why did I hve to pick Man City. I'll tell you why, because Fulham had their reserves out and Man City were basically at full strength. 1-1. Disaster. There were no pictures of it, hence it not being in play, so had to listen to it on radio, City sounded shite anyway. I'm over the moon United didnt waste 25M on Tevez, he needs around 6 chances to score 1. One word for City tonight, toothless. One word for me tonight, seething. Their playing extra time at the moment, but I hope they lose now anyway, not bitter at all eh! I knew Round 3 was going to end some time and it was a good run, but at home to fulham reserves, fook sake.

Anyway, was a tad unlucky with my Darren Sammy bet today. He outscored the whole top order only to be beaten himself by the bloke batting at 9, he was at 7. Not really unlucky because you know he had every chance himself, he was got out to an absolute peach so no blame to him from me anyway. Just to do better than the top order and then for a number 9 to beat you was a bit gutting, that was the highest score that bloke has got ever too. And he had the powerplay and a bit free swinging because there was so little wickets left. He had 9 more runs to make after Sammy went, they were batting together for a good while. No complaints just gutted, very near to collecting €1,200.

I felt absolutely gutted at the time seriously. Went for a run this evening and was thinking, you know Harry Findlays idea of confidence and the backing 2.1s, 5 win 5 lose but that bloke has more confidence than the bloke who backs 10/1 shots, both win the same amount but the bloke who backs the favourites has more confidence and is happier overall. I reckon hes totally right. From my point of view, I'd hate to have that feeling I had today 11 times out of 12, and even though you havent lost any money over the period of time, it would be terrible for your mental side of things to have to stick through the 11 losers. As is always the way you know, €100 at 12/1 and your eyes light up, you think its on, it was evens each of two when they were batting together which one would go furthest, and I had one at 12/1, what value, you cant buy food from value though can you.

I know backing "value only bets" appeals to most, but honestly I'd rather back a winner at 1/3 than a "good" loser at 20/1. I dont know how you explain it, values important yeah, but the overall idea is to win, you dont get paid unless it wins. So winning must come before value mustnt it? Interesting one. I lay an awful lot of low prices on cricket, backing 100/1 plus at times, is that value to me at the time I do it? Honest answer, I dont know, I do it because I think the odds will drop and I can trade. Is that value? Or is that knowing what to do in a certain situation? Sometimes I look at the odds and shake my head thinking "everyones gone mad" but like, if my view is wrong and I lose, well then wasnt I wrong and everyone else right? I lost money and they won, simple.

Like you know, if someone said to you they'd give you 1000/1 on Sea The Stars against Kauto Star in the Cheltenham Gold Cup next week, would you back it? Is it value - two horse race, almost certainly yes. Will it win - no chance, unless John Oxx has been schooling him secretly over fences! So, youre getting fantastic value but at the same time youre gonna lose, whats the right thing to do then? You dont wanna lose money. But you wanna back the value.

Really and truly, is there such thing as "value." Not really, someones opinion of "great value" might be a great lay to someone else. Heres one, if everyone agreed on something there would be no markets for anything because we'd all back the same thing. So whats value? Value, to me, is a fancy word someone came up with for people to use when they think something is a good bet, you say it to sound smart and to seem like you know what youre talking about, we all do it lets be honest I do it too. Value is something we say to ourselves, in our heads, that were "happy" with our bet, win or lose sometimes, and everyones different. RUK for €20 a month is value to me, whereas some people wont pay it. I see all the races, they dont but are €20 better off, whos right? I spend €50 on a shirt that I think looks sexy, I'm a sexy bastard anyway, but the bloke across the road thinks I look like a queer wearing it, whos right? I'm happy in my shirt, so that makes it value to me, but not him, so theres never a full 100% definition of value on anything. You bet on something because you think its going to win, end of story. And trading, you back/lay because you think the odds will move your way, end of story.

Somehow anyway, without doing much at all, without spending even an hour at a computer today, I've gone and lost €400, biggest loss in weeks. C'est la vie. Football bank back to €25 and start again Round 4. And will try not let today affect confidence and thinking plans going into tomorrow. Be hard enough mind. What bet was the football bank, bet number 13, ooooh! I thought all that stuff was nonsense when I was typing it out, why is it whenever you think something is jinxed/cursed it turns out to be? Positive mental thinking man. Or your bets doomed! By the way, won a fiver on Betfair today. 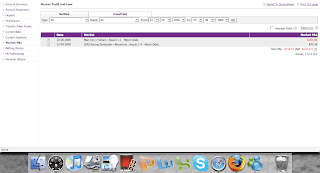