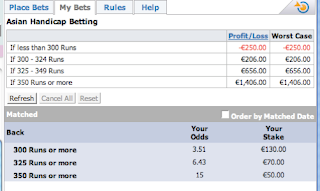 Australia finish on 296. As you can see from the prices I was going against the general feeling but bloody hell I had them getting around 330+ at one stage. I'm absolutely seething. Tim Paine slowing down when he was in the 90s cost me massively, and cost Australia from getting a big total, he faced 17 balls between 90 and 100, what a tosser. While Hussey is hitting 4s freely at the time down the other end, Paine put him under pressure that wasnt needed and slowed down everything for 3 or 4 overs, Hussey got out due to the pressure of looking for runs, and then Paine after taking so long got out himself. White and Hopes were brilliant at the end, I was expecting that really with the powerplay though, if they'd be still there at the end they would have easily got past 300, no blame on them though they were doing their job with only 3 or so overs left trying to whack it.

Seriously disappointed with that result. Will England chase it down? Possibly so but going on them being England you'd say no. I had Australia around 30 runs short so if it was any other team in the world I'd probably lay Australia at 1.28 for my max bet, which is fairly short, but its England here. They cant be trusted with anything. Under lights I'd say 300 is about par on this pitch, Englands massive problem now is they have to start fast without losing wickets and score at the rate in the middle overs, which they never do. Cue a slow start letting the rate get up, lose one or two wickets, score at 4 runs an over when the rate is 6.5ish and going up, thats what normally happens anyway.

All things considered, no bet from here, cant even get the opening powerplay bounce out laying Australia at 1.28 because you know England will start slowish and Lee will be bowling too. Think England should get near the total but obviously dont trust them in the slightest, if England had posted 296 and Australia were chasing it'd be max bet on Australia wouldnt it. England keep up with the rate they have every chance, just they cant seem to do it, remember theyve traded odds on in every ODI so far at some stage without winning one.