20/20 cricket. Insane. Its for mad people. Its crazy. Got myself into all sorts of bother today on it by switching, it wasnt actually too bad because I switched at "only" 20 ticks higher from the price I backed at. I'd like to think I have sort of a 6th sense for when things are going pear shaped, but normally its more to do with me feeling like "I'd rather have €100 red on one team than €300 red the other." Today was lucky basically, was on the right side of a collapse, for once (ever)! But instead of getting profit, I was delighted with zero, because I had €120 odd red the other side. Er, I could go into great detail about it, but basically the long and short of it is 20/20 is nuts, there was 50 tick swings today for a 6, with about 8 overs still to go. Thats mad like. These swings are fantastic if youre on the right end of them, but Jesus its shite when youre on the wrong end. I wouldnt agree with blindly laying short odds on either because theres always a time and a place you know. Maybe it just doesnt suit my style and I should just keep it small on it. Its difficult because I love cricket and theres so much 20/20 on tv. Like I mean, what can you say about it, all plans seem to just go out the window.

Anyway, I have a question. Why is it when I have €100 on 0-0 it loses, but when I have €25 on it, it wins? Sods law is it? I only did it to follow up on my Ireland bet the weekend just in case it did actually happen, laid off my stake on Betfair at half time. Absolutely delighted to take a few quid off Paddy Power now theyve limited me. Suck it paddy, whos the daddy!

The horses was a place back of Corskeagh Royale at Punchestown around about evens, I thought he was miles better than most of the field. Ran into a small problem by the fact that he couldnt jump, you know er, that tends to help in a chase. One to avoid in the future I reckon. Weapons Amnesty ran a bit of an odd race, he jumped to his left sometimes unbelievable amounts, I dunno about him really, I'd like to watch his next race before I actually back him. A lot may think he'll be great going the other way around and has loads in hand, but you know, it still wasnt a good round of jumping, and it was a poor race.

Thinking about having the €100 I won today on Harchibald tomorrow. I love that horse. I read Noels a bit worried about the trip, but I hear hes schooled well so I'm not too bothered about the trip. Sizing Europe wouldnt bother me too much either, I'd be more afraid of what Ruby will be doing on Bobs Pride. An interesting race anyway, Harchi for me at around the 11/4 - 3/1 mark. 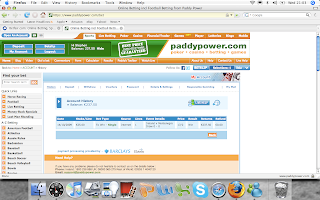