Well, Fame And Glory was pants! Not worth getting out of bed for, never mind flying over. Johnny got beaten on another fancied one in Naas today, the first race, the horse will never ever win a race and will be in a can before long if he doesnt cop on to himself, and no, I didnt back him! Going along with the other two 2nds on Friday night, I think thats the end of the flat for me. Real end of season stuff and I reckon I'll just draw a line through it now and move onto the jumping. Apart from that really, not much else happening in the happy land of Mr Maher, got a tip today for Rubys winner in Naas and had a few quid on, I think half of Ireland were on, 9/2 into 7/4, first thing that was said to me when I landed in Dublin airport.

The cricket today was really stupid on my part. Ah, I'll put it down to being "out of touch" after missing a few games, but stupid trading all the same, minus €40 and shouldnt of happened to be honest you know, shouldnt have gone near the game. Stupidity, nothing else to describe it. Just entering the market at the wrong times, niggly little annoying things like that, even if I'd have won, its still something I shouldnt have been betting on in the first place you know. The worst thing was, it was 1.04 after the first innings and I let that go saying to myself I wasnt betting, then when it started to bounce out I got involved only to be burnt, like if I was betting on it that 1.04 - 1.2 trade was mine, and the fact I let that go means I shouldnt have been in the market after, which I ended up doing, which annoys me.

Specials was X-Factor again, laying John & Edward to be bottom two, bit too close for comfort me thinks with a €300 liability. However, the woman, she is shrewd! I suppose they got called out first last week so it makes sense they'd be left til last this time. Bloody nervous times though.

I should also add, my Spurs bet won to get the Betdaq football bank back over €50, I entered Paddy Powers last man standing for the first time ever too, and they got me past the first week, so we'll see how that goes over the next while.

As for my week, well its been fantastic. Everything went brilliant bar that €250 I ended up having on Fame, knocked the week back a fair bit but you know at 2/1 on Betfair yesterday morning I'll stand by that bet with no complaints. A nice few wins on the cricket this week when I had my arse in gear, today was a small bit annoying to lose but cant win 'em all I suppose. The soccerhoofball was laying off my 0-0 Ireland bet so no worries there. Been a really quiet week, under 20 markets bet on, a good bit of them when I was in Punchestown Thursday so I've not been on betfair at all really this week compared to others, yet still a proper good profit. Some weeks it just goes like that, last week was pants, this week was easy, swings in roundabouts.

I'm starting to see the key to everything is not losing when youre going through bad times, everything is all so easy when youre winning, but when youre in a bit of bad patch, its what you do then it all that matters in the long run I reckon. I loved this week though, I really love gambling! Its nice to be properly in love with it again, maybe during the summer that feeling went a bit, its hard when its an every day grind, but you know its still the best feeling in the world when you back a winner. The you just turn around and go whos the daddy! OR you could do what Maradona does and tell everyone to suck your cock, watch the video, the man has gone up in my estimation. 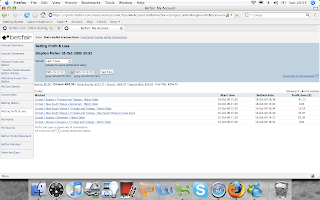