Up and down day, slow day, frustrating day and add in a bit of me being a tosser day, all wrapped into one. I've no complaints about what happened, lost €86, was all me, dropped €120 on the very first race and basically there was no way back. I've been so bored doing in running I've even been taking screen shots.. 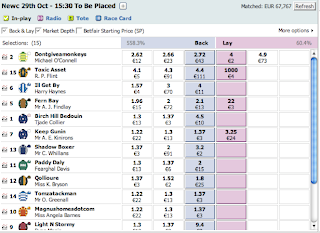 As you can see, pretty much nothing on the lay side, thats in the middle of the race too, not near the start or finish, the middle. Disaster. Now, this isnt a reason for not winning, and it definitely isnt a reason for losing. Its bloody annoying though. Thats why you know when I get myself down over €100, theres no way back, before I'd be sort of confident I could maybe get back to level if things went right, at least I'd know I'd have a chance anyway. Now, theres no way back from €100 down when theres so little money knocking around. Just have to accept it when I make a mistake and move on. I have to know that if I do lay a winner in running, its just the way it goes and I lose, its impossible to be perfect yet with the amounts of money in the market, the market demands youre perfect during every race, or you lose. Losing €50ish is grand(ish), its just when it gets to over €100, you can have a near perfection day and still not make up the ground on the one bet that cost you.

Its no bother when youre sailing through the day picking up a fiver here, the odd tenner there and it all adds up, but I suppose when you get behind youre more likely to be pissed off about it and have less patience, hard to describe, I just want money in the market, whether I win or lose, at least its there you know. When youve sat here and got nothing matched for around 45 minutes your mind starts to wander, everyone is fighting over that €4 to lay at 22 in the market, cause theres bugger all else some times! I accept all the meetings were on ATR today and that makes a huge difference when youre putting in bets, but still, no money even up. Its nigh on impossible to do the win market off ATR too, obviously, but as well as that I'm sitting here going "oh this'll win, then no this'll win its going better, no wait this'll win, the first one I picked is coming back he'll win, no wait the one on the outside" By the time I've actually went to click I've changed my mind, maybe its because I'm so used to the place market, thats goosed though, I miss the cricket!

If it was just the horses now each day, I dont think I'd bother anymore to be honest, to think I used to pick it over absolutely everything, its grand for an hour or so but it gets to the stage where I'm sat here thinking, my pictures are miles behind and theres no money there to even try and win, stuff happens at Lingfield on the computer before it happens on the TV, the market suspends 2F out on ATR, only joking, but it just all builds up and every little niggly annoying thing has you ticking by the end of it. I could feel it here when there was three races left, wanted to have €50 on Fallon, purely because he was riding it, didnt even look at the form, said to myself would I be doing this if I was €80 up instead of down, answer is definitely not.

No point betting just because its the only thing on offer you know, might as well carry the loss through to the next day, doesnt really matter having a losing day when you can get it all back and more tomorrow. You never think of that at the time though. Do I want to bet on the snooker tonight? Yes. Am I good at betting on it? No. Do I like it that much? No. Why do I want to bet on it? Because I've lost money. I wont bet on it, I'll wait for something I'm good at to come along, just accept a loss today and remember that week I didnt bet Monday through Thursday and then won €550 on Friday, because I was waiting for something I'm good at. I've had plenty of annoying days like these, and it certainly wont be the last, just annoying when its happening at the time you know. The thing is, unless I get knocked down by a bus later, I'll still be here tomorrow, theres a fair chance that if I keep betting in this mood my money wont.

Just to underline how bad I actually was, I started the day with €200 in the bank, and done near half, one of those days, but at least I didnt chase, massive difference between losing €200 and losing €86 when I sit down here tomorrow. Would have been easy to chuck an extra €50 odd on something to try get back to level too, how many times would it have won though, probably less times than it would lose.
Posted by Stephen Maher at 10/29/2009 05:27:00 PM