Happy Halloween. Worst holiday ever by the way, just answered the door to a group of little monsters. "Theres no sweets in the gaff" I said (there isnt, it wasnt a lie!) "Give us money then" they said. They were about 7, kids today whaaa, little fookers! Why bother to dress up as witches and ghosts, might as well put on one of those concern jackets they have on Grafton street!

Never mind not having sweets, at one stage today I had no money! Got pulled over by the police on the way to Naas, we were late so a bit of speeding was needed you know, anyway still made it there on time. Last minute stuff so didnt know Carbs had failed the breath test and wasnt riding, had €250 on course and €100 here as below, probably mightnt have gone with €250 had I known he wasnt riding but sure its done now. I dont think even the great man himself would have given the horse that much to do, but he still jumped the last terrible and wasnt exactly flying at the finish, not one of those to feel robbed about but at the same felt a little bit let down. Then it was called out that Carberry wasnt riding and what his replacements for the day were, I then thought Noel had stitched him a loaf in the parade ring after the first ride and that why he wasnt riding for the rest of the day.

So then it comes to the second, and Tranquil Sea was 6/4, couldnt have it, really had to lay even though it was such a trappy little race, sure enough it won and was 6/4 for a reason I suppose, can only go with youre own feeling you know so no worries there. I backed Made In Taipan on course too, was going OK when he fell, who knows where he would have finished, I'm not one for wondering about these things though. If they cant jump they dont deserve to win.

Now I'm stood there €200 down for the blog and the guts of €300 down on course after two races, actually quite chuffed I pulled it back, it could have got ugly, backed Noble Prince as planned, I'll never change from the plan regardless of how much I'm up or down, was only a 1/2 winner but it was welcome at the time you know. Then River Liane went off at 2/1, massive really win or lose, was forecast 5/4 and there wasnt much else in the race, Slippers gave him a good ride too. Sure look though, he finished within 5L of Go Native, he was a certainty after getting that close to the greatest horse of all time.

Boxing comes from last night, happy with my €25 win considering my first bet was €80 on the other bloke, was a close fight so just kept backing the outsider, had more green on the draw and the other bloke (cant remember their names), nice to win even though I was wrong basically. Profit on Betfair of €74 and a loss with Bet365 of €100 today, I'll take it happily, because at one stage it was far worse!

Small bit worried about my last man standing pick here, United 0-0 at half time, they arent exactly banging in the goals lately so theres a strong possibly it'll be a nervy second half. Gonna watch the X-Factor before I bet too, either lay Lloyd or Jedward bottom two, depends really, wonder who'll sing last, see what the filly says anyway but its not a week to be going mental and having liabilities of €300 like the other weeks with storys of acts topping the poll, then another paper saying their finishing 4th bottom, who do you believe you know. As always I suppose, I'll see what the odds do and then go from there. 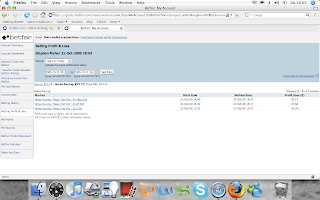