The sun is shining, its free in for children, its free in for students, its €15 in for adults with a fiver off food and a free fiver bet, so only a fiver in really, and its a great card. No excuse not to. Its rained all day yesterday and even though the sun is out now theres water on the roads so looks like its rained during the night too, the ground should be testing enough, soft enough that you'd want to be on soft ground horses and against good ground horses you know, its doesnt look like type of ground you'd "get away with."

Hopefully Carberry can get me off to a winning start at 1-05, hopefully he comes down the outside swinging with his arse up in the air as he does. I hear the Meade team really like this one, looking through his form on his first run he opened up 11/4 went off 6/4 and his second run opened up 6/4 went off 10/11, so the price movements basically back up they think hes a good un. The main dangers today come from the same race last time, Sunwake and Brodies Dubrovnik, whos finished 2nd and 4th, on good ground. Looking at there form, Brodies Dubrovnik went backwards on his 2nd run really finishing 4th so I'm happy to take him on, both his runs have been on good ground too. And while Sunwake is consistent with her two seconds, she finished 6th on soft to heavy so I'd be happy enough taking her on too. On paper its a weak enough race so I'm very happy to be on Prima Vista. What I am seething about though is the price ticking down when theres only like a tenner being matched each time it moves, its less than half an hour until the bookies price it up, if people had any sort of a brain they'd wait, but theyve got there €4 on so good luck to them, theres no point putting €100 into the market because it wont get matched and then someone will undercut you straight away, so that'll only make it worse than it already is! I'm still happy backing at 4/5, just probably I could have had 10/11 or evens bar that.

The 1-35 is an absolute cracker, Made In Taipan, Tranquil Sea, Joncol and Trafford Lad all running, bit gutted Forpadydeplasterer is a non runner but you cant really have a go at the trainer for not running this early in the season on this ground. The small problem with this race is that so many of them are stepping down in trip, you know you could come up with a solid reason for laying all of them. Paul Nolan was delighted that Joncol was stepping up to 3M at Punchestown, now hes at 2M, when hes ran at Naas before hes only really powered away coming up the Naas hill at the finish and that was over 2M4F. I think Tranquil Sea wont like the ground and steps back down from around 2M5F that he normally runs over. Trafford Lad has a new trainer, a bloke I've never heard of, his family own the horse or something so it seems hes become a trainer to train this particular horse, hes stepping down in trip too and was matched at 12 on Betfair earlier so you'd wonder how fit he is. Made In Taipan is the only real 2M horse here, I remember though he put in a shocking round of jumping here and got himself like 25L behind in basically a two horse race against Jayo, hopefully that wasnt just because he doesnt like the track or whatever.

My pin falls on Made In Taipan anyway, just because that little reason not to back him is the least strong compared to all the others. Its a great race, be brilliant to watch, not exactly one you'd want to be lumping on in though! Small bet on course for me, nothing that'll kill me, and hopefully they all come back safe because they should all be good horses this season.

I have the 2-10 as a two horse race between Noble Prince and Time Electric. Time Electric is a sort of annoying horse because you cant trust him to turn up in the mood, he can be brilliant and he can be shite, you dont know. He seems to like the front running tactics and got a fantastic ride the last day in Listowel, the only thing though is its far much more harder to front run like he does on ground as testing as this, and its a long way up the Naas straight. I dont think he likes soft ground either, his two latest wins have come on yeilding ground and just another two random runs that caught my eye were finishing 7th of 7 on soft ground and 6th of 23 on soft ground. You have to take Noble Princes fitness on trust as he hasnt ran since May, but he has some seriously good form from last year when he was stepped up to this trip, he seems to like heavy ground too having won on it the last day. Its not really a race you can have a bet on until two minutes til the off just to see what the story is. I'd much rather be on Noble Prince at 8/11 (Paddy Power) than Time Electric at 2/1ish. I'll wait to see what the Noble Prince price does on course though, that'll tell you how fit he is. I think hes the most likely winner though.

River Liane makes his chase debut at 2-40 having finished 5L(ish) behind Go Native over hurdles the last day. As everyone knows, Go Native is the best horse in the world and probably the greatest horse that'll ever step foot on a race course, hes currently in training to become a two time Champion hurdle winner before going on to be a three time Gold Cup winner, and will then happily retire with me as my wife. So, upon that, if River Liane can get to within 5L of Go Native hes an absolute certainty, like the others might as well not even bother. Joking aside, I reckon River Liane will win if he jumps well, theres not that much in the race really, Roccos Hall needs a longer trip, Sky Hall has terrible form and we dont know much about Sorceror. River Liane seems to like soft ground having won here on it and finished 3rd in the Irish Champion hurdle on heavy. Wouldnt be having a big bet at all on course, €100 tops, but hes my idea of the winner anyway.

Then theres two impossible handicaps at 3-15 and 3-50, I'll probably go for something to eat while there on and then tell everyone I backed the winner. Although there seems to be big gamble starting on Bedford Row in the 3-50, might be nothing, might win easy, I dont know.

Lastly, we have the bumper at 4-20, bit of a guessing race this one, even though every race is guessing for me sure. Talab was sort of ridden like a non trier the last day and finished well to get 2nd, he was near last which isnt helpful in a bumper, that was on good ground though so youve basically no idea whether or not he'll go on this ground. Thing is, none of the others have any sort of good form to their name, its a shite race like. Maple Court finished a bad 7th first time he ran but looks interesting with the Tommy/Paddy Mullins combo, if he was fancied from there would he be the 8.6 he currently is on Betfair, definitely not is probably the answer. I'll probably side with Talab but not big at all, its definitely not a bumper for chasing on anyway.

Actually really looking forward to heading to the track, even though I fancy Nobel Prince and River Liane I'd rather back them a few minutes before the off, so only bet for the challenge is Prima Vista at 4/5, thought about going a bit bigger but happy enough with €100. Hes a few ticks bigger on Betfair now but if he goes out I'll get best price guaranteed with the bookies, I'd be disappointed if he didnt win to be honest but I wouldnt shocked you know, not that I'm ever shocked when I'm wrong! I'd have him as my best hope for a winner on the whole card anyway. 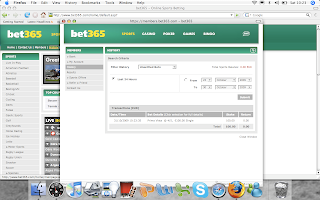