Leopardstown and Cork called off, point-to-points called off, GAA games called off, it was like the world was coming to an end or something this morning! I even went shopping on a Sunday afternoon instead of betting, gay or what. Anyway, got the X-Factor wrong this evening, bummer, bit small annoyed I went away from John & Edward and took Lloyd on board bottom two, you know he has the biggest number of fans on Facebook, and basically all the little girls love him. Er, they must have been out trick or treating this weekend though! I said earlier to people that I was happy to lose if they were in the bottom two at the prices I was laying (Lloyd was evens), it was that type of feeling you know.

I have to laugh though, Jedward singing second last with all the works on the stage, the only ones to dress up for Halloween too, you couldnt make it up really! The judges really hate them dont they (wink, wink!). I should have just stuck with my views on them and not brought in another act but there you go I did it. I was full sure Lloyd had the fanbase, so stand by the bet. Sure enough he survived the bottom two deadlock to go through to next week. No regrets laying evens you know, but I should just stick to Jedward in the future. Lesson learned not to deviate off my original plan. I cant be too gutted at all either because I'm still around €600 in profit on the X-Factor, although all that has come from John & Edward, and not Lloyd. I wont lay another act again bottom two, John & Edward are my guys. The €1,500 green, its still on!

Also, to follow up on the 24/7 Pacquiao v Cotto heres the second one..

Although Pacman looked a bit better when in LA, my views havent changed really though, I'm still backing Cotto. But as you can see from Pac been mobbed at the airport, the money will come for him fight night from America.

Been an incredibly quiet week. Couple of blank days, a total pap day in running, a level day in running, down plenty but pulled things back in Naas, and then today. Believe or not, my make or break bet this week was X-Factor, thats how quiet its been! No cricket, first time maybe since the blog started, not sure but odds on it is. No real fancies either this week, the fact I didnt have any winners and only lost €170 reflects that, if I'd have won it would have been a €170 profit week, basically the week was the Lloyd lay at evens. Lost a few quid to the bookies too, if anything I'm only disappointed to be back down below the €18,000 mark again and not the actually losing, but what can you do, I went with what I thought and I was wrong, I wont let it bother me you know.

Hopefully theres more craic next week, Breeders Cup should make sure there is really, and maybe the odd cricket match would be welcome. Best thing this week was getting through to the next round of Last Man Standing. Onwards to next week, sight problem though, I have the Scousers penciled in for my pick, er, its not really a great time to be backing them is it. I suppose they have to win a game some time though! 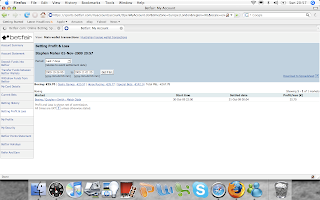