Its the race that stops a nation so I might as well have a guess at it..

Mourilyan E/W at 20s with Ladbrokes.

He had solid form when he was with Oxx and won two good races in Dubai, was then sold and it took them ages to get him right. Finally came back to good form this year, finished 2nd over 2M, then 4th over 1M5F when there was zilch pace on for him and Frankie made all the running on the winner, then won a listed race over 1M6F fairly easy in Goodwood. The last time he won a race, he won four in a row and then got a shocker off Mickey Joe to finish 2nd to end it, so he seems like one of those that puts in a row of good runs together, Ryan Moore has been riding though, the horse is a bit mad like, but he has a good turn of foot for a 1M6F - 2M horse and he likes good fast ground.

Ideally I want to him to be held up off a fast pace and then come flying without the horse thinking about what hes doing, never heard of the jockey so dont know if he can ride him like that you know, you sort of have to put him asleep for the first half and then be very strong with him at the finish. Hopefully he runs a good race for me anyway. 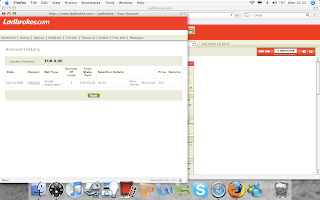