Tonight 8-00 in Croke Park. 0-0 at 6/1 with Paddy Power, worth €100 for me, shorter on Betfair at the moment (6.8 minus comm) and likely to go even shorter near kickoff. Italy only need a draw to go through and Ireland only need two points from two games for a playoff, once there isnt a goal in the first 30mins should be a really good bet.

Just probably need to get past that 30min mark without too much trouble, the fact both teams only need a draw means their unlikely to be "going for it" if its 0-0 with 20 odd minutes to go. Its a risky bet though, one mistake and its in the back of the net, its worth the chance though. I dont particularly like Powers but their doing a good special tonight, you get your money back if Robbie Keane scores the last goal. If Italy do go 1-0 up, Ireland really have a limited number of "goalscorers" but hes one of the key men so that has a good shout of getting a second chance, he takes the peno's too.

Basically, I think both teams will be delighted with a 0-0. A point puts Italy through, and a point means we wont have a "must win" game against Montenegro on Wednesday. Everyone knows what Italy are like for defending, I'd guess Trapattoni wont be wanting to take too many risks either. Just be hoping there isnt a goal from a corner, free kick or something like that. God knows what an early goal will do to the game though! 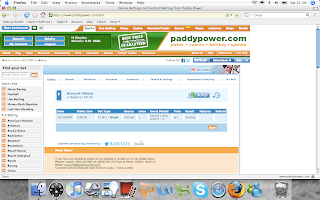