I've to get another six quid off the snooker later but I fancy an early night tonight with no gambling and just to relax. Most of that P&L is from yesterday too, actually lost €33 on Betfair today. I had an absolutely brilliant day with the bookies though picking out the Munster National winner at 10/1, put it up on Facebook and on the side of the blog there, I think its the biggest priced winner I've had since I started that Irish horses thing. Going through handicaps isnt really my thing so I was delighted, not every day you back a 10/1 winner either.

I have to say Croke Park last night was immense even though my bet didnt even last 10 minutes, managed to get two tickets for €100, so much for paying €140 each on ticketmaster eh, never seen the whole crowd standing watching a match in Croker, not even at the GAA, shame it didnt last longer than two minutes until Italy scored again though, we never hold on to a lead, even if it was the 87th minute! Premature ejaculation as a nation. Good craic in town last night though all the same. Really hate when people have a go at Trap, I know were shite, but sure look thats what we are, you can only work with what youre given, I'd rather be crap and get to the playoffs by drawing loads of games than be crap and lose, everyone seems to have forgotten what it was like when Stan was manager.

Anyway back to gambling, and by my own standards I've been woeful this week, everyone has a view of how youre doing things, well I was basically terrible this week. Some awful cricket losses, not big ones just little niggly €50s that shouldnt have been happening, it all adds up. Yesterdays win was, er how do I put it, it wasnt lucky but it wasnt smart either, I backed a team at 1.65, sat and watched the other team matched at a low of 1.06, then to see the team I've backed come back and win. I was talking the other day about having a big set of balls for 20/20 cricket so I just basically went with that idea. I'm pretty sure the few losses in a row isnt a random thing either, I put it down to it being 20/20, I dont think I'm too fantastic at it to be honest.

I dont think it gives me the time to trade probably, its so quick like and momentum changes about ten times during an innings, thats why I have my head thinking now to viewing every bet I do as a straight up bet. It really worked yesterday, you know to decide what exactly youre doing before it happens, if I wasnt sure yesterday I'd of been panicking watching the other team go 1.06 etc, where as I was sitting here going for fook sake what a bunch of tossers I've had my money on, but at the same time even though I was going mad it was still the right thing to be doing by not doing anything. I'm delighted Somerset won because if they failed to chase down 150ish on that pitch with the wickets they gave away, the tv would have been broken, laptop smashed, cat kicked, windows put through, it would have been terrible.

This whole week has been a disaster really not just the cricket. Snooker bet with the phone going dead was an awful feeing, I dont blame the phone really I still did the bet in the first place so stand by it, Ronnie missing a sitter was highly annoying, something that goes 1.01 and you dont make money isnt good enough either from my point of view. And the horses, well a Ballydoyle gamble went kaput on Friday night at Dundalk, but I did back other winners, just that was the main one. No excuses this week at all, no reason for losing, no teams/people letting me down. This week was all me not being good enough. I'm always going to get those weeks I suppose though, so just put a line through it and move on. That horse winning in Limerick today was unreal, I cant say how important it was, just completely puts a different look on the week and basically knocks off the Betfair loss. I still dont want to lose on Betfair as its the most important part of my gambling, but when youve had a bad week, just that winner today was fantastic.

Also got a good few quid matched on Fame And Glory today for the English Champion Stakes, I didnt "take" the money that was up, I knew he was rated as "more than a 60/40 chance of running" but its not really my style to take money there when I have sort of "inside info." I put money up on the lay side and someone has been kind enough to take it so cheers! It'll be some result if he wins now. Not sure if I'll lay back my stake at some stage (my average odds 8/1), I see hes down to 2.5 now, William Hill went 4/6 I think and Paddy Power go 11/10. Looking at the race, I think he'll win if we dont mess up the pace, price has gone now though. There was also a rumor at The Curragh today that Sea The Stars' coat has been clipped and their thinking of the Breeders Cup now, I havent had a bet in that market yet and wont be going to. I spoke to Mickey Joe after the Arc and he said he didnt want to run, I was tempted to lay him then, now I tempted to back him hearing about the clipping, I reckon the two feelings cancel each other out so no bet and watch will be my plan. I'm also sick of losing money all year on him, however I did say that before the Arc and still lost €250, I say a lot of things. 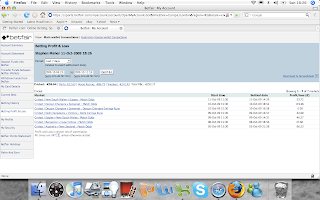 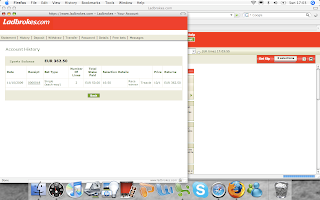