My god. I've never been on such a high from X-Factor in my life, HA! What a pair of legends. I said at the end of my post yesterday I might have a cheeky little lay for bottom two because I've done it for the past two weeks, well that became a big lay last night when I saw they were singing last. A fact for you, only one act in the whole history of X-Factor has been in the bottom two singing last. Do you really think the judges want them out? Not a chance. I accept plenty of people hate them, the fact is they get the most press, this stopped being a singing competition years ago, I honestly believe that Simon wants them to keep going for a few more weeks and stir up a bit more controversy, controversy sells, controversy means more viewers, controversy means more votes, controversy means more money. Think about it. No one seems to understand, the boo's are a good thing!

Lets be honest, if they were really hated so much by Simon and the show executives, why give them THE plumb spot, if they wanted them off the show put them on first so people forget about them. I'd forgot all about the other acts because these two little monsters sang last. I know they'll come unstuck soon, I dont reckon they can win like they cant sing, but I've built up enough money to still be ahead now even if they do go. I also wouldnt lay them if they were over 4.2ish to be bottom two. Obviously there'll be an awful lot of hate towards them, I think its terrible really, their only kids sure, and they obviously have a fan base, unlike Danyl at the moment, whos brilliant but still in the bottom two. I cant stress how important it is to forget about this being a singing competition when betting on it, its a popularity vote.

Anyway, that result cheered me up after United got beaten by Liverpool today, the less said about that the better. Moving quickly on to the cricket, set my alarm at 8 bells this morning to wake up for the India v Australia match, first bet laying the Aussies, very next ball an Indian wicket, bollocks. Bit of a touchy moment there having got up especially for it thinking why me, went all red and took a few moments to see what the story was again. Went all red at 1.28, laid again at 1.3, I know I've technically made things worse by two ticks for every €100, but you know I need that time, just to think, just to be happy of what I'm doing in the market really. Seriously seething with the Indians though, god they threw away some of their wickets, were generally shite, and without question in my mind should have won, I will add though the Aussies bowled well. The most annoying thing was they took the powerplay when they roughly needed 130 runs off 100 balls with 7 wickets left, now thats pretty easy you know, most good teams would generally get that, why oh why take the powerplay when you only have to knock around singles for the time being.

So, I click to back Australia to basically get rid of liabilities on them after seeing India have took the powerplay (laid at 1.3, price is now 1.5), as I click first ball in the first over, what happens, wicket. Next over, wicket. Three wickets in the powerplay. And Australia heading towards 1.01, so book a loss in excel and move on, check out a few markets for today, the football, X-Factor, Galway, whatever. TV catches my eye again a little bit after and Harbhajan hits a 6, I'm here thinking why couldnt the real batsmen do that (were down to the bowlers at this stage), then he hits another 6, with a few 4s to follow. Oi Oi, theres still hope, click back into the market and Australia are trading at 1.04, India needed like 70ish off 30ish, my book is -€280 Aus +€700 Ind from earlier, leave it just to see what happens thinking this is false hope you know, cant remember how long it actually was but maybe 3 overs or so later, Australia are 1.8 with India needing 9 off the last over. Success! I am a trading god after all, er, maybe not! Greened out in a panic leaving €250 Ind €50 Aus, very next ball Harbhajan gets out, and Australia go on to win. How I won? Pure fluke. But I suppose it goes to show, all the random bits of luck, backing or laying and then a wicket comes evens itself out over time, its just you notice the bad far more than the good. I was delighted.

Its been an utterly fantastic week, with a profit of €1,500. St Nicholas Abbey was the highlight of everything you know, highlight of everything for a while actually not just this week. My winning bet on John & Edward from nearly two weeks ago came off today, I must add thats Emmas card on the account on Boylesports as they closed me down before I started the blog, that was the first bet after we opened it too (asked for €400 they would only lay €350), its my name though so I wonder how long it'll last, a different address seems to work though. Laying them to be bottom two each week has won me a fair few quid too. Added to that, a winning week on Betfair, only coming unstuck with my T&T bet. Doesnt get any better really for a week! I havent been perfect like, just I suppose everything has gone my way you know, good results on stuff I fancied, theres certain weeks I'm wrong so I'll enjoy it when its good, I think a trip into town for a few drinks is in order actually as its a bank holiday tomorrow! Whos the daddy, BOOOOOMM! 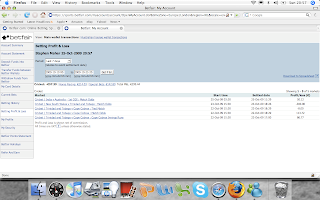 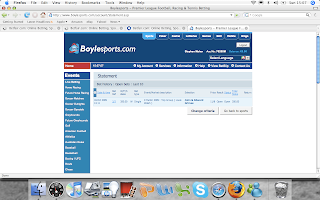