BOOOMM! Woosh time. I could say a lot about today but sure look everyone saw how good he is so I can stop preaching now. I'm delighted, best day for ages on course, although have to say not a great fan on Doncaster, first time there today, rather Naas or Navan to be honest. Everyone knows I love this horse anyway I wont waffle on about him anymore. If I could just say one thing though, he is NOT "the new Sea The Stars," he is not the new anything, he is St Nicholas Abbey.

Actually just had the flight from hell home with the wind so will keep this short, had €300, max confidence bet sadly that I didnt like losing, on T&T again yesterday. This time they werent good enough but you know I'll stand by the bet after theyve won me a few quid over the last week, 160 was a fair score to chase down, probably only difference between this game and the others was the fact that it was the final and a few nerves were flying about. They give it a whack every game and I accept thats them and thats what youre getting when you back them, so losing a wicket every over for the first three was less than ideal but at the same time thats the way they play you know. Coming back to Thursday, letting the bet run on them or green, I was thinking about that more than the loss, because they won when I went all green, yet lose next, if I'd have not gone all green the profit and loss would have nearly cancelled each other out. Anyway sure thats in the past now so fook it!

Scratched around today at Doncaster on the horses, thats were the -€13 comes from, I'm not much good at guessing on English racing am I! Had my St Nic bet with Ladbrokes the other day so no worries that Betfair mobile was a complete joke to use today, terrible, might have been the weather though I suppose. Anyway, off to watch X-Factor, things will be back to normal tomorrow, am really nackered after today. C'mon John & Edward! Might have a cheeky little lay for bottom two depending on the odds after they sing, see what the filly says. 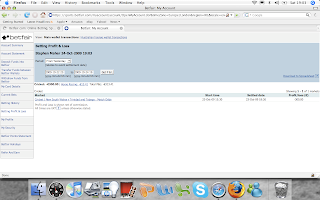 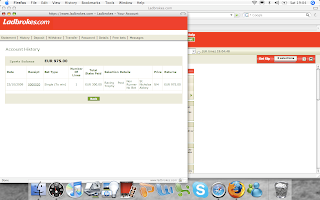