I know I said no post from Paris, but I've woken up this morning ultra confident of Fame actually winning this, maybe its something they put in the water, maybe its the buzz of being here. But hes edging out towards 8/1 - 9/1 on Betfair and thats too massive not to be involved for me, also odds against to place, definitely having some of that. Although having bumped into a few lads from John Oxxes while buying the RP they said Sea The Stars is working amazingly, got better since Leopardstown and is unbeatable no matter what. That knocked me back a peg or two but I'm still confident in Fame running a big race, hence a good cut on him to place with a small win bet to take away the Sea The Stars risk.

The only horse whos beaten him is Sea The Stars after all, so odds against to place seems a fantastic price, also the small bet on the win because of the trip, he might just outstay Sea The Stars, thats the only hope of beating him I think anyway. I'd like Johnny to be ahead of him all the way, even though he kicked before MJ the last day that didnt really work, so I reckon he has to be ahead and kick when ahead, you know weve tried five near different things with different horses and it hasnt worked. But Master got closest with the in front and kick in front tactic so I think use that again with a better horse and it'll be close. A lot depends on how things work out from his draw though. All things considered, it should be a great race.

Had a really good day yesterday, I wish Australia could play Engerland every day at cricket, I'd be so rich. Ponting is immense, and has replaced Chris Gayle as my favourite player this summer, hes all class, and a nice bloke too. Boxing was straightforward really, backed the outsider in nearly every fight in Prizefighter, over just 3 rounds still cant see why people have prices under 1.3, I think if I remember correctly I won over €600 last time and €300 this time just laying favourites. Last time I stopped after the first rounds though, went straight through this time and it didnt really work. But sure look, laying 1/3 shots youre gonna lose more than win, and losing €30 after winning €300 didnt really bother me. In hindsight, I lost €120 after winning big, its weird that I'd be gutted if I lost that in a day but it didnt bother me in the slightest because I'd won beforehand, funny how the head works. Its important not to 'throw away' money just because youre ahead because it all adds up at the end of the month, but I did have a plan to lay favourites so I suppose I stuck to it. Thought I was in for another big win in the final until the knockout, basically they were all worth the bet at the odds, some won and some lost.

Ground is perfect for everyone in Longchamp too, no complaints from anyone. Cant wait now. Wouldnt be gutted if Sea The Stars won because hes a fantastic horse, just want Fame to place, and maybe give favourite backers a bit of a scare, he'll hit the front at some stage anyway. It'll be really close tomorrow I think. Everyone will have their views, "Fame has no chance" "Sea The Stars is a certainty" etc etc, I'm always happy to back my view and to be honest I could care less what people think about the horse I back once I'm happy. I dont know if its the Paris air or something, but I'm confident now, I wasnt when I left, somethings sparked me into believing. As I said, you can only back what you think will happen and sure let the best horse win. 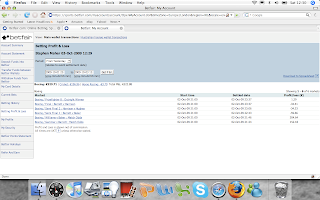