Hello. My name is Stephen. And I am a loser.

Havent had a winner of any substance since the 25th of October. Only one being Mourilyan who finished 3rd at 20/1 E/W, whos the daddy. I'm not feeling in bad form either like, I dont know, just struggle on without losing the head. Anyway, backed Carbs in the first a Fairyhouse today, really fancied it to win to be honest, was full sure I had the second favourite (turned out to be favourite) beaten and thought it looked like a total two horse race on paper, that sort of head to head bet. Both ended up getting beaten in the end. My one just wasnt good enough, simple as that. It only dawned on me after the race that I probably should have laid the one I didnt fancy instead of looking for something to beat it, but thats not my natural style, and anyway why do these things only come to you after the race? I love hindsight, its fantastic!

I realise I'm not picking winners so wont go mad, just kicked back and lay on the couch for the rest of the afternoon watching countdown on mute while listening to Michael Jackson, I dont care what anyone says, I love life. Oh, and er, I only watch countdown purely because its great for maths..

Dont wanna put the Indian sign on any of the runners in the Breeders Cup so I'll keep my mouth shut rather than call them certainties. To be honest though, I'm not lumping on any of them, I know zilch about the opposition so I wouldnt know what I was getting into you know. Same craic as before with Rip though, if he runs theres nothing wrong with him, and if he loses the foot problem will be the excuse. Viscount Nelson is working well but thats always been the case. While the others all have solid chances too, its probably the best "team" AP has ever sent over actually. Please god we get a few winners (or winner at least) anyway.

In other news, I bumped into Lady Gaga on Grafton street Tuesday while on route to college, shes asked for my number and obviously shes loaded so I'd be a fool not to. Were going to the cinema tomorrow, I'll report back if shes really a man or its just a rumor, taking one for the team..! 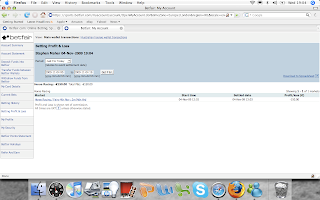