Absolutely gutted with Rip, no excuses either stopped quickly and was beaten before they turned in. Er, I dont know, only just watched it, hes not THAT bad. In hindsight, probably could of done with the lasix, although dont think it would have made that much of a difference. Winner was awesome.

Only two bets today, Rip and Haye. I had him winning but you know what the judges are like over there, cant be too sure, Valuev was shite though barely even landed one punch. That said Haye wasnt throwing a lot either. Backed pre-fight with Boyles and then did the in running on Betfair, probably should have won a little bit more but was a bit nervy with it being in Germany. Cant complain.

Gutted after Rip, but anyway on to Navan tomorrow and an early start to get it out of the system.

A €130 winning day overall but it doesnt half feel like a losing one seeing all our horses bomb over there. I'd say the Betfair P&L will look like a total disaster for the week tomorrow evening too, but it hasnt been that bad I suppose, few winners with the books saving me. Onwards to tomorrow..! 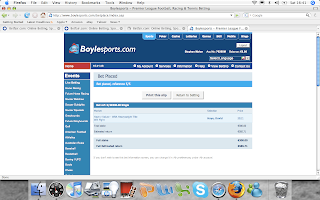