Just back from Navan, good day, good racing. Catch Me at the last though, sick! Started off poorly, down €350 after three races but then rattled off a string of wins.. €300 on Operation Houdini at 6/4, €300 on Made In Taipan W/O Big Zeb at 4/5, €300 on Osana at 8/11 and €250 on Morning Supreme in Limerick at 8/15. On a complete roll banging in the winners, books open up 4/6 on Catch Me, had to have all the profit for the day on, €600 and €200 for challenge too, takes it up coming to the last and the rest is history. Sick. Thats racing sure and jumpings the name of the game I know, but you know well, everyone knows what its like to have a last fence faller. He didnt jump all to well the whole way around actually but if he was going to fall I'd rather it not when leading at the last, happy he got up though thats the important thing. Could of been worse, could of lost on the day, but what could have been! Mirrored everything on course for the challenge only smaller.

Catch Me falling at the last pretty much sums up my week you know. €300 loss on India to chase down 250 and they fall apart, next game I have €400 green on them and they lose five wickets in the last three overs to completely throw it away (traded 1.04) and Catch Me falling at the last. Probably been unlucky with all of them. The other horse losses, I've no excuse for you know I was just wrong, Rip Van Winkle etc, it happens and its no bother, this is life. Just needed a bit of luck elsewhere on the cricket that I didnt get, one of does weeks I felt cursed at times actually but still cant really blame luck you know its hard to describe. Few wins with the books have kept me going though so its not as bad as the Betfair P&L, although I rate that as the main one and want that to be in profit each week. Its felt like an awfully long hard week.

Havent watched the X-Factor this week either so wont bet on it tonight, Jedward are too high to lay bottom two anyway, really tempting to lay Lloyd at 1.4ish because I think he has a fair following, hes shite though and they never voted for him last week. I reckon he wont be in the bottom two but not betting on it, been gambling all weekend and neglecting Emma a bit so a night off is due. Best thing to happen this weekend was Man City drawing, if Liverpool win (touch wood) Monday, Last Man Standing will be down to the last 30ish and I'll still be there. Off college all next week too, so it'll be different and will have more time for Betfair, which is the way I like it.

This week though, basically just backed losers and been a tad unlucky when I needed to be lucky, but I havent chased once, and you know I can only keep going and keep doing what I'm normally doing. Actually not disappointed at all because I did everything "right" in my head, was just woeful at picking a few winners! Its odds on you'll be wrong more times than youre right gambling so gotta take it on the chin and keep the head calm. 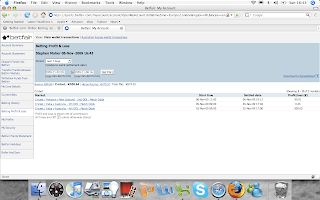