Now, before I start I have to say the horse in question won, so alls well that ends well. But anyway, I backed something at 4/5 that I could of got 2/1 on. Purely because of laziness and stupidity. First off, oddschecker is basically useless if you dont look at Betfair, Betfair controls the market, like it or not, its the place to be. Stand in the middle of the betting ring with Betfair mobile, you'll soon see all they do is follow Betfair. I made the silly mistake of not even checking Betfair before I did a bet this morning, went through the race, thought it was a good thing, looked at oddschecker, 4/5 best price, back it, check Betfair and its 2/1. Felt like a gobshite. All the confidence in picking him completely went and I wanted my money back off Boylesports. Obviously that wasnt happening.

Why back something if youre not getting best price sure? Whats the point? If you lose you lose everything, so if youre gonna win you might as well try and win every single cent you can. Last time I'll make that mistake anyway. Dont even know why I didnt check, laziness I suppose. I have to know absolutely everything before I have a bet.

I have another example, last night a mate backed Lucie to go at 10/1, while Jedward were trading at 1.02/1.03 on Betfair (only what I've been told, I didnt have Betfair open), hes backed something at 10s when he could of got 50s purely because he didnt know what was best price. The only time I bet with the books is when their best price on something (Betfair commission considered) and when I dont feel the need for trading on the selection. Like I said, if youre gonna win try grab all you can. Obviously delighted the horse won..! But I could of been getting back €500ish instead of €200, big difference, and my own fault. The horse returned 5/6, talk about swinging in roundabouts.

Last night was hilarious though, absolutely hilarious. Simon saving John & Edward, you have to laugh, all the stick he gave them, saying they were shite, he'll quit, he'll leave the country. You couldnt make it up really. Finally, everyone knows what hes up to anyway, he likes them, and he always has. He had them their ready to go, all he had to do was say it, and he saved them. People backing at 1.02/1.03? Insane. Best singer was Lucie by absolute miles obviously, best money maker is Jedward by miles though. Whats everyone talking about this morning? X-Factor. Whats all over the papers? X-Factor. You think people are gonna watch the show next week? Of course. Whats gonna happen? Everyone will vote more, Jedward fans will vote because they feel they need the support, people who hate them will vote for their favourite because they want them to be safe, and to finish ahead of Jedward (seen as so many hate them). Whats all that mean? More money for Simon Cowell. Everyone loves money! Would Simon Cowell back a horse at 4/5 if he could get 2/1, definitely not, hes a shrewd hoor!

Anyone saying its a fix, a joke, a disgrace, whatever, ought to wake up. "Simons such a tosser saving John & Edward over Lucie." It went to deadlock, who was bottom. Whys there so much drama over it if no one voted for her then? D'ya think everyone will vote next week, yeah they will! Money. Money. Money.

John & Edward actually being in the bottom two was a whole different matter altogether, for starters they got good comments for probably the first time ever, Simon said they were alright so that lost them the "rebel" voters, and because they got so much publicity over the song choice everyone thought they were safe. I didnt vote because I thought they were certain to go through with the song choice, many others did. Look at Lloyd, bottom two last week so the fans voted in force this week. 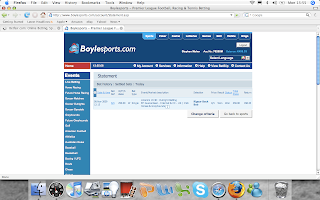