People argue with me over getting Sky Sports, my view is you NEED it, their view is its too expensive, nothing is to expensive if you NEED it. Anyway, todays match wasnt on Sky but I watched it on a link, how far behind? I dont know. But look at the odds asked for and the odds matched, big difference between 2.32 and 3.7! Now, let me tell you it makes a massive fooking difference between getting matched at 2.32 and next ball hes out and its 3.7, thats what usually happens me! But still like, if youre not betting with live pictures youre basically betting blind, I know theres certain circumstances where its impossible to avoid though.

Still got a fair enough trade out of it, only put €44 on compared to €100/€200/€300 because of where I had to watch it. Left €40 on New Zealand, zero on Pakistan.. what happens? Pakistan win. What happened when I did the exact opposite on Monday.. New Zealand won. I cant win! Anyway, this week still stands at zero, zilch, nada, nothing, blank, level, €0, feck all. Its still a better result than this time last week though.

Theres also absolutely no point trying the horses. Southwell, Ludlow and Taunton dont exactly get me jiggy and I'd only end up breaking the laptop after a few races. Whats on tomorrow to look forward to? Dundalk. Dundalk, what, really? Bollocks anyway!

I am however seriously excited at the prospect of backing Cotto the weekend, his odds are ticking out nicely as I thought they would with the Pacman fan money coming in. I've a mate out there at the moment (jammy bastard!) and hes saying the casinos have Cotto at 3/1 - 10/3, so I reckon he'll tick out a little more between now and fight time. I've had plenty of people try to explain this to me but I still fail to see how beating an old Del La Hoya and, er, a not so great Hatton makes him the best pound for pound boxer in the world. I dont know who came up with that idea but anyway, the beauty of it is we'll all find out on Saturday night. I've had the first two 24/7s on the blog, 3rd one is below there, its not really that great but its alright if youve nothing else to do. Its also important to remember Cotto is a natural at the weight (147) and I dont think Pacman has ever been with a natural at this weight, and Cottos also only been beaten once by a bloke with concrete in his gloves. Anyway, I'll stop now because I sound far too confident. But for me, I've my max bet here waiting with Cottos name written all over it.

Zero is my favourite number anyway sure.. 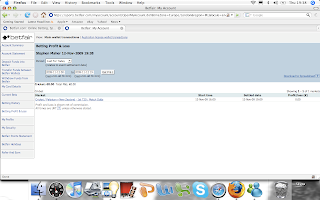