I always like to do something different after a heavy loss, yesterday hurt you know €450 a lot of money to anyone, a week wages to most, I have to change something so it wont happen again, if nothing else just to be happy in my own head with what I'm doing. If I was in any way unsure of what I came up with last night, today sort of proved it in my head, Judge Roy Bean getting beaten at 2/5 in Navan, I backed him before the non runner at just under evens on Betfair first thing, but he still got stuffed. And I did think he was a certainty before hand. So, a new staking plan for BEFORE the event..

All the in running maxes (between €300 and €400) still stand, and I'm gonna go more so in running all the time from now on. Its not that I dont want to bet pre-off, its just that looking through excel I reckon I'm much better in running. It'll also stop a lot of the €300 bets going down, rarely lose the full bet in running, while in the last few weeks I've lost the max bet pre-off a good few times. I'll see how it goes anyway, but I'm happy with the stakes there.

Cricket today went really well, as did in running on the horses, lost €100 on Judge Roy Bean so delighted to get back near level. I've changed from the place market to the win market this week, only showing loss for the week because of other bets, won in running. Place market is basically dead, I'm only annoying myself trying you know. And I know full well I'm behind on the pictures in the win market, but I suppose just have to be that bit better than those blokes and read the race better. I'll be stung a few times but its all part of it, I also wanna learn how to do the win market properly for summer plans, so you know I'll keep doing it and hopefully it'll come good, I'll know pretty quickly if it isnt working too.

Onto the cricket, and I actually really like the South African reserve squad now, their playing really well at the moment, sorry not South African reserve squad I meant England, only joking but they do have a lot of South Africans. Trott is a fantastic edition to the team though. As is Morgan. Basically youre just hoping the English contingent dont bollocks things up when you back them. I like the no fear idea of playing and you know as long as they keep their bowling in check they should win more games than they lose. I still dont fully trust them however. Traded to have lots of positions today, but was mostly on England, thing is though like you get a wicket and youre nervous straight away. There was lots of backing, then laying, all greening, all redding, then backing again, then laying again. Rather than just saying, right they'll win this from here. They'll only improve though, I suppose its just memories from them being knocked around the park and collapsing that scare me. This team has a good look about it, and I'll trust them more in time.

As for the week, well I'm in profit on Betfair, different story however with the books, to make it a €250 losing week. For what I've learned and now changed, its probably worth it in the long run you know, but no one likes losing. I really like the go more in running idea, and less bets/lower stakes before the off idea, hopefully it'll work. I've been good in running this week, pants pre-off, I reckon it'll also take away a good bit of good form/bad form runs. You know I lost €360 to the books and won €110 on Betfair, cant really look at that badly as I've corrected what I've done wrong for the future, so onwards and upwards. It would be ten times worse if I didnt know what I was doing wrong sure, excel is more important to me than the Racing Post these days. No bet on X-Factor tonight but just really hoping Jedward avoid the bottom two, and trade a bit lower, I'll green out soon enough if I get the chance. Basically zero chance of Joe and Stacey being bottom two, so youre left with Lloyd, Olly, Danyl and Jedward. Olly has a good following, and Danyls a good singer, so you know its not a betting proposition laying Jedward but hopefully they make it through.

Also working on a laying system, that today, the very first day, showed a 14 point loss. Good start then, er, not quite. Will give it until into the next year before I actually start putting money down. By the by, who did I have penciled in for Last Man Standing for this weekend before I got knocked out? Arsenal. It was never meant to be. Went with Chelsea this week for handiness sake, but will sit down and sort a plan of attack this week.

Just to say too, I've an assignment due next week in college, first one of the year, 2,000 words or something, bugger. And havent even started yet, actually dont mind that, havent even read whats its about yet. So next week might be a bit bare. 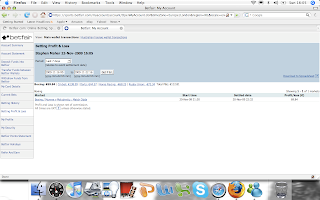