Mickey Owen three goals.. have it haters! Hes into the horses too and seems a sound bloke, delighted for him.

As for me, still goosed after last night. Gonna take tomorrow off, maybe if theres snooker around 6ish might get involved but will take the day time off. Never doing the all night shift again, dont care whats on. For anyone on Betfair too, just read this for Thursday.. "Due to the Second Test between Australia and West Indies going the full 5 days, our site maintenance has now been postponed until this Thursday, 10th December 03:00 – 11:00 GMT. During this time, ALL Betfair Products will be unavailable. We apologise for any inconvenience this may cause and will endeavour to complete this maintenance as quickly as possible." Might as well go into college Thursday morning so.

Yesterday went well, actually got lucky because when I turned on the tv Ronnie was 2-2 looking like he was playing well and around 1.5 - 1.6, I only found out later he was 2-0 down and playing absolutely shite. Just jammy to be on him at the right time really, but it was comfortable after he seemed to just be going through the gears. Today was much harder, although had a fantastic position initially backing him at 1.3 after Ebdon only potted ONE ball (I know, 1.2 to 1.3 on one ball in a first to 9 game FFS!), pretty much bollocksed things up by trading in the 1.0x's, if I hadnt of had the great starting position I'd of lost on the market. Its been hard going today after no sleep yesterday, but sure a day off will sort that out tomorrow.

Also, wish Mick Kinane a long happy retirement, one of the true greats and an pure gentleman to boot. Was just chatting there this evening on Skype about him, remembering stuff, Johannesburg popped up, what a turn of foot he had..! The furlong pole in the video, just fooking woosh. Of course he never made it as a three year old, which is slightly scary thinking of St Nic for next year, the turn of foot he has as well, just tip the reins and hes off. So many two year olds that never make it as three year olds, you'd just be praying he isnt one of them. 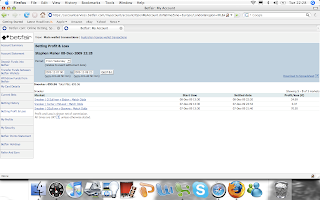