Lines v Maguire this evening, game was spent trading between 1.2 and 1.0x Maguire. Now, I made a couple of bad moves but matters were NOT helped by this screen for HALF AN HOUR! 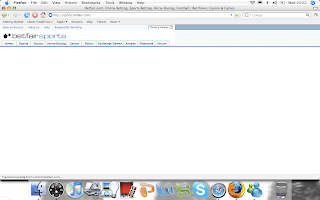 It logged me out, then wouldnt let me back in, then wouldnt load the markets. Oh dear, it was count to ten time. I was seething. Oh boy was I seething. The funny thing is, this happened over probably were I made my best move, laid Maguire at 1.04 and he went out to 1.12ish (on the graph) only problem was I was looking at a screen like this while the odds were moving.. smile! Quite proud the laptop is still in one piece but anyway, regardless of that happening, it was still a bad market and just would be been a less losing market had I got that trade (eventually backed it back at 1.06). Everything else I did was basically shite, you know just couldnt do anything.

Did lose the head after Betfair going down, and made things worse by maybe 20 odd quid, it was bad before that, but er, havent lost my temper on Betfair in ages and I did tonight, bit disappointed but it happens us all I suppose, its done now. The greatest thing about it is I'm here writing this and not betting on the next match. Packed it in for the day.

Also learned today that "use firework holder, light fuse and retire to a safe distance" does not mean stick it in a plant pot and put in on the shed roof. Carnage. I was only celebrating the Budget.. (that was a joke by the way, in case you know, anyone eats me).